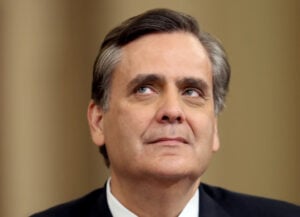 Iran’s men’s national team staged a silent protest by refusing to sing the national anthem at its opening World Cup game. In response, the government threatened the players and their families with imprisonment and torture. FIFA declared that it would punish players for wearing armbands defending LGBTQ+ rights in a nation that brutally represses homosexuality. The whole event kicked off with Qatar security officials threatening a journalist.

As soccer’s ultimate showcase doubles as a reminder of the very real violence governments deploy to squelch expression, GWU Law professor Jonathan Turley wants everyone to remember the real threat to free speech: private actors who prefer not to listen to right-wing dogma.

Or, perhaps more directly, from his column reflecting on Robin Keller’s extended whining over Hogan Lovells parting ways with her after she accused Black women of committing genocide:

Take Above the Law, which Keller references in her column. The site has become one of the most vocal anti-free speech sites on the Internet.

What he means by “anti-free speech” in this context is that we’ve recently defended the right of students to protest a member of a recognized hate group (subject to appropriate time, place, and manner restrictions) against a law school threatening to punish them, the right of law schools to hire their own faculty without imposed ideological quotas, and — most relevant in light of the Keller story — the right of a private law firm to disassociate from a partner making discriminatory and racist remarks in the workplace. In the real world, those stances are all core free speech. In Turley’s bizarro legal framework, “free speech” is not about barring the government from suppressing citizen viewpoints, it’s about forcing private actors to endorse viewpoints they don’t agree with.

And yet, that’s the rewriting of free speech that Turley has devoted his depleted career to pushing.

When the negative right that is the freedom to speak without government interference becomes the affirmative right to be heard through the loudest megaphone available, it’s a very short trip to inviting the very government intervention the Framers passionately sought to avoid. This time to compel speech from private citizens, whether it’s in punishing protests, outlawing boycotts, or installing some kind of goofy “affirmative action for hiring QAnon professors.”

The professor posted another article today blasting Apple for distancing its brand from the car fire that is Musk’s Twitter management. Why? Apple has as much of a right to express its opinion as the world’s richest man. He dresses it up in a kooky claim that Apple is a monopoly, apparently downgrading Dell, Google, Samsung, Amazon, and more to also-ran status.

But his complaint has nothing to do with antitrust and everything to do with the fact that his addled view of free speech cannot countenance any right to respond to a viewpoint. For most of us, the role of free speech is in supplying the marketplace of ideas with maximum inputs to sort out. In time, some ideas triumph and some ideas fizzle, but that’s the virtue of a free people engaging with a range of opinions. By contrast, his model casts the existence of a “disfavored” viewpoint as a virtue in and of itself.

So Musk’s defense of anti-vaxxers and bigots is “free speech” in this model and anyone refusing to endorse that is “anti-free speech.” This renders the rights of private people fundamentally contingent. And contingent rights have a bad habit of flowing in only one direction.

What would happen, in Turley’s mind, if the shoe were on the other foot? If a company like Disney speaks out against Florida’s “Don’t Say Gay” law, must companies like Hobby Lobby or Chick-fil-A be forced to do business with them? Turley’s framework seems to say yes, though it’s hard to imagine he would actually take that stance.

It’s easy to say that Turley’s take — in a moment of global awareness of the toll repression takes around the world — is ill-timed. But it’s not really. Because time has no meaning in the echo chamber he’s constructed around himself as he bounces half-cocked legal takes off the walls. There’s a foundational self-centeredness in Turley’s hot takes. Torture in Iran, if he contemplates it at all, is of a kind with the “repression” of his network of disgruntled conservatives sad that law schools aren’t interested in Con Law professors who want to teach that Brown v. Board was wrongly decided and that law firms are willing to place their reputation and the well-being of their employees over a partner dropping racially inflammatory commentary during office hours.

And, sooner rather than later, he’ll get the cable news invite, or opinion column in the Wall Street Journal, or book deal to share his empathy with those folks over how there’s simply no platform for sharing those views anymore.

I won’t be checking it out though, because I have the freedom not to. No matter what Turley thinks.

Does Your Firm Have An Effective Budget?

Does Your Firm Have An Effective Budget?