At The Pinnacle Of The Profession: Latinos And Latinas Making Strides In Am Law Firm Leadership 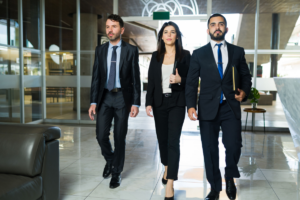 Last week marked the beginning of National Hispanic Heritage Month, which extends from September 15 to October 15. Now is the perfect time to discuss the contributions of Latinos and Latinas in Biglaw and, in particular, to highlight our community’s representation in top Am Law firm leadership roles. As a Cuban-American, this is a topic close to my heart. Undoubtedly there is still much room for improvement, but the good news is that we increasingly have reason to celebrate!

Over the past couple of years, Am Law 100 firms have redoubled their efforts to increase diversity in their ranks. And when it comes to Latino and Latina lawyers, we are starting to see progress at various levels. The American Lawyer’s 2022 Diversity Scorecard indicated the most significant year-over-year improvement since 2001. Large law firms hired 1.5% more Hispanic associates, which was a greater rate of increase than for any other racial/ethnic group. At the partnership level, there was a 2.6% increase in Hispanic/Latino equity partners from 2019 to 2020.

But the most visible achievements have come at the top of the Biglaw pyramid, with an increasing number of Am Law firms now featuring Latino or Latina managing partners. Let’s take a look at these luminaries whose success is proof that the pinnacle of the profession is open to Latino and Latina attorneys, notwithstanding the inevitable challenges.

As the sole Latina at the helm of an Am Law firm, Yvette Ostolaza’s journey is particularly inspiring. Born in Miami to Cuban parents, Ostolaza attended the University of Miami School of Law and first made partner as a litigator in the Dallas office of Weil, Gotshal & Manges. She joined Sidley in 2013 as managing partner of the Dallas office and served as global co-leader of Sidley’s litigation practice before her elevation to Chair of the Management Committee in April 2022. She was recently honored by the Hispanic National Bar Association with the Mari Carmen Aponte Award, which recognizes a “Latina lawyer who is the first to break a glass ceiling.”

Born in Venezuela to Cuban refugee parents, Miguel Zaldivar did not emigrate to the United States until adulthood. After graduating from the University of Miami School of Law, he joined Hogan Lovells and set about building a Miami-based Latin America project finance practice. As a partner, he became co-leader of the Hogan Lovells Infrastructure, Energy, Resources and Projects practice. In 2018, he relocated to Hong Kong to manage the firm’s 14 offices in Asia and the Middle East. Zaldivar began serving as Hogan Lovells CEO in 2020.

Currently in the number-two role at Paul Hastings, Frank Lopez will assume the top leadership post (Chair) on October 15. The New York securities lawyer and former investment banker only arrived at the firm in 2019. A graduate of Georgetown University Law Center, Lopez spent 15 years at Proskauer Rose before jumping to Paul Hastings. In his relatively short Paul Hastings tenure, Lopez has succeeded in raising the firm’s profile in leveraged finance and has played a key role in attracting lateral partners from firms such as Skadden and Covington & Burling.

Unlike his colleagues on this list, Wally Martinez’s ascent to the helm of a major law firm is not a recent development. Born in Manhattan and raised in New Jersey by Cuban emigre parents, Martinez graduated from the University of Pennsylvania Law School. He first made partner at Holland & Knight in Miami before leaving to found a new Hunton & Williams Miami office in 1999. Martinez served briefly as general counsel at Diageo North America before returning to Hunton & Williams as managing partner in 2006. He has remained at the helm through the merger with the former Andrews Kurth Kenyon. For many years, Martinez was the only Latino leading an Am Law firm, so the fact that he now has significant company in the Am Law leadership ranks is especially noteworthy.

A rising generation of leaders

The four leaders profiled above occupy particularly visible roles, but it is worth acknowledging in addition the rising generation of Latino and Latina lawyers poised to ascend to top posts in the coming years. To take just one example of a Latino partner to watch, Eduardo Fernandez currently serves as co-head of the European Committee at Willkie Farr and co-managing partner of the Paris office. A native New Yorker who received his J.D. from NYU, Fernandez began his career as a Wilkie Farr associate in New York. He is now recognized as one of the leading M&A and private equity lawyers in France.

With Layoffs Lurking, Does Biglaw Pass The Vibe Check?

Need To Go To Trial? The Best Trial Practices Out There

Questions To Ask Your Interviewer In A Lateral Interview

ChatGPT Has Pretty Depressing Thoughts About Biglaw And The Billable Hour

Dueling Rankings Of The Biggest Biglaw Firms In The Country (2022)

What Information Can Be Obtained From An IP Address?


Warning: unlink(/tmp/jnewsfirstload-wOrA4N.tmp): No such file or directory in /home/customer/www/dailylegalbriefing.com/public_html/wp-admin/includes/class-wp-filesystem-ftpext.php on line 142