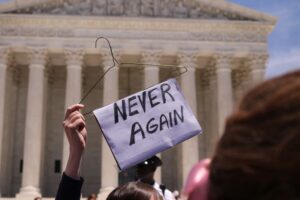 The most successful perversion of the American constitutional order over the last 60 years is almost assuredly the largely unchallenged effort to rewrite the free speech debate. Yesterday, the Wall Street Journal editorial board released the latest salvo in this decades-long endeavor, bashing Yale Law School students for protesting at student events. It’s been a long strange trip from 1968 Berkeley to 2022 Yale, but here we are.

Back in the 1960s, the fight for free speech meant standing up for protestors disrupting campus to be heard on the important issues of the day. It meant demonstrating against the Vietnam War or standing up for equality on campus. Reactionary politicians ran against the idea of free speech. Ronald Reagan ascended to the California governorship pledging to “clean up” Berkeley by cracking down on this unfettered freedom of speech.

But somewhere along the way, the conservative movement realized it’s a lot easier to redefine speech than fight it.

A group of protesters disrupted a recent Yale Federalist Society event. According to the WSJ, “A hundred or so students heckled and tried to shout down the panel and Federalist Society members in attendance.” Anyone familiar with the protests of the 1960s or, well, anything about the history of the First Amendment for the first 200-some-odd years of the country would identify the protestors as the embodiment of free speech on campus.

In fact, the Simpsons have graced television long enough that we can see how, in the 1990s, everyone understood the visual grammar of what free speech looked like.

That flag-burning joke is funny because we all knew without words exactly what free speech looked like. And this may seem like just a funny diversion from the topic, but this is gravely serious: how society jokes about a subject says a lot about what it understands. And there’s a show still on the air that used to wordlessly give lie to the new right-wing free speech narrative.

And yet this is the Journal’s Orwellian description of the Yale Law event:

Policy. Barring protests. That disrupt free speech. Someone unironically strung those words together in a sentence and didn’t instantly collapse in shame.

A decade ago, one might write off this sort of high school civics failure as intentionally cynical, but I fear those days are behind us. These people actually believe 1960s anti-war protesters were the enemies of free speech. Hippies may be annoying, but they’re archetypically what a healthy freedom to dissent looks like and you suffer through heckling students because you believe in the Bill of Rights.

Yet the bad faith argument is fully internalized with the Wall Street Journal. Whatever they believed 10, 15, 20 years ago, they’re now fully at peace with the idea that the freedom of speech means everyone must be an unquestioning bullshit receptor for whatever someone with a microphone chooses to dish out.

The latest events at Yale Law School in which students attempted to shout down speakers participating in a panel discussion on free speech prompts me to suggest that students who are identified as those willing to disrupt any such panel discussion should be noted. All federal judges—and all federal judges are presumably committed to free speech—should carefully consider whether any student so identified should be disqualified for potential clerkships.

On the one hand, Judge Silberman is kind of right. If judges don’t want to hire protesters, then they don’t have to. Judges have a lot of latitude in hiring and if they feel strongly about denying employment to someone exercising constitutional rights, go ahead. It’s doubtful that many in that crowd wanted to work with a judge who complains that America doesn’t love the Confederacy enough, but so be it.

The adage about the frog in a slowly boiling pot of water gets involved in climate change debates a lot, but it might be more applicable to free speech. Despite the best efforts of lobbyists and right-wing politicians, most people actually believe in climate change. Yet there are a lot of people out there who’ve watched this reconception of speech and never even noticed as the characters in this morality play were flipped. And these are the people who will uncritically retweet this story as if student protestors or subtweeters are the greatest threat to American democracy as opposed to its heart and soul.

What is the Purpose of Paying for Homeowners Insurance in Maine?