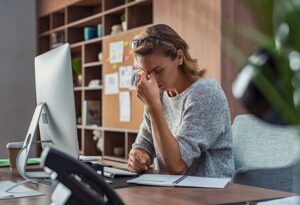 Law ain’t for everyone. And for the 0L reading this who thinks, “Yeah, maybe not for them, but I’m different,” please re-read the first sentence. While I don’t have the data on this, I think that a lot of people start law school assuming that this will be the thing that lets them live the life they’ve deserved for so long. Money, prestige, the ability to use Latin conversationally and be understood — all the stuff they sell you in the brochure. And the truth is, it may very well be. But committing to law schools, like most investments, is best made with a sober mind and information about the windfalls and the downturns.

I got swept up in the excitement of OCI last year and landed what I thought would be a really great job at a large firm in a large market. With the summer program ending in the next few weeks, I have come to the realization that this just is not right for me.

No number of happy hours or fancy lunches can obscure how stressed everyone is. The work I’m doing is pretty uninteresting and very unsatisfying. The pay is obviously unmatched, but I’m realizing that I can live a happy and more balanced life on much less (Note: I’m lucky to have very little debt, which is a huge privilege when I talk about this stuff).

I’m now looking at some legal services offices in my area, but I’m worried that I have not demonstrated sufficient commitment to public service. I’m also looking at clerkships and positions in my local government. Meanwhile, I keep hearing people worry about a recession and I’m scared that if an offer comes from my firm, turning it down would be a huge mistake.

This comes from a thread asking fellow associates-to-be if they’ve got any advice on dealing with the stress and boredom that firm life can come with (outside of the job security, happy hours, and free food). If you’ve ever been cautioned about the importance of getting to know the culture of a workplace and brushed it of because hey, six figures are six figures, I heavily encourage you to read some of the feedback from folks who’ve spent some time at Biglaw firms. Some folks did their best to avoid the golden handcuffs:

I hated every second of BL. I banked enough over 2 years to buy a house then called it quits. There’s life at the end of the tunnel.

I made the mistake of working at an elite litigation boutique (because prestige is a powerful drug). All that meant was lean staffing so a ton of work at unpredictable hours. I stayed because it was good experience and I didn’t know where I wanted to go next.

And it is always nice to see what firms say about gender, equity, work/life balance and the like, but you should also do your due diligence and see what they do about those issues when push comes to billable hours. And this isn’t an attempt to doom and gloom you out of what could be your dream — we at ATL occasionally hear legends of people in Biglaw who actually enjoy their jobs — I just want for you to make sure that your assumptions about getting paid post-JD are accurate.

I think you should sit down and really think about your goals. The first few years of your career are going to be hard and stressful no matter what you do; the learning curve from law student to lawyer is just really steep. I hated most of my time in biglaw, but it was 100% the right choice for me. It allowed me to buy my first home and set me up for a really great job that I could not have gotten straight out of law school. If you go into BL knowing your goals, exit strategy, and how long you want to stay, you can mitigate a lot of the stress/unpleasantness. The people truly working themselves to the bone are usually people operating under the delusion that they’ll make partner one day. You don’t have to be that person.

Are you in touch with anyone in their first few years out of law school? It may be a good idea to get their input on what you should expect. I usually make alcohol puns here, but much information can be gained over a cup of coffee.

How Long After a Hurricane Can I File a Claim in Louisiana?