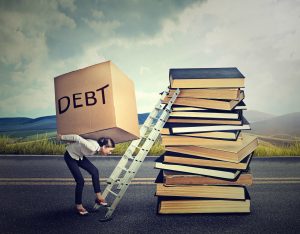 Hey there. It’s me again. To the new 1Ls reading this, welcome to the profession and to Above the Law! To everybody else, no, we don’t have an inside scoop on who Biden is picking for SCOTUS. Yet.

That said, we do have some financial updates on student loans! According to the American Bar Association, the average law school graduate owes approximately $165,000 in educational debt upon graduating; that’s a huge jump from the inflation-adjusted $115k 2008 era law school graduates were settled with. For context, about $120k of the debt current grads have comes from law school — the cost of a JD bumps up to averaging about $155k if you attend a top 10 law school. Inflation notwithstanding, that’s a lot of money shelled out to learn torts. And most people aren’t even satisfied, with about 75% of recent law school grads doubting their degree was worth the money!

As a first generation law school graduate, I had no clue law school would cost this much. I mean, I knew; the data is readily available online and I could calculate what three years at WashU would cost with my scholarship package. But I didn’t know. So, if you’re a K-JD who doesn’t have lawyer parents, ask around. Please. Get a feel for what living with monthly $2k debt payments is like. Know that it may cause delay in buying a home, push back marriage dates, or be a factor in the divorce.

If you read that and thought, “Hey, I’ll be fine. I’m single, cool with renting, and if I had a big law salary I’d get more money than I would know what to do with,” here’s a secret. First, you might not get it. While Biglaw takes up a fair market of legal income conversations, only about 13% of law school grads end up there. And if you do get picked up by Fancy Name & Rich Name, there are people with six-figure incomes who still live paycheck to paycheck. So plan on reining it in a little. I’m not saying you can’t buy that cocktail ring. But I am saying you shouldn’t buy those golden handcuffs. They can chain you down to a job you hate because you have to pay off bills you don’t really need attached to you. And trust me — they are protean. Sometimes they’re in the shape of an expensive car you’ll only really get to enjoy in rush hour traffic. That still somehow finds a way to break down often. Or an affordable, $20k NFT of an ugly monkey that loses half of its value right before you have to make an unexpected roof repair.

You don’t have to be a litigating ascetic. Would it be cool if you became a CEO of massive company that lives like the rest of his employees? Yes, but that’s not the life everyone will choose. But if you keep having moments where you look down at your phone and wonder why your credit card bill is as high as it is, this is for you. You can change that. Take a weekend (or a few hours between studying) to sit down and imagine the cost of the life you want. Where would you like to live once you get the degree? What would rent be like there? Will you make your own meals or do Uber Eats every day? Plan on having pets? Did you factor your vices into your overhead? Those rare edition Magic: The Gathering cards add up after a while and I wouldn’t want you to have to do anything drastic.

You might have some business bros who tell you that if your investments pay out higher returns than your loans, you’d be losing money if you pay them off; just ride out the debt and make money over time. And maybe they’re right. But maybe you’re one of those people who puts a premium on financial freedom and would one day like to sing this and mean it. If so, get to budgeting.

If you’d like to ask for or give some advice to 1Ls, graduating 3Ls, and new hires trying to hit a net worth of zero and beyond, send your contributions to cwilliams@abovethelaw.com. All information that is read and shared will be anonymous unless requested otherwise. Let’s figure it out together.

Amy Wax Refuses To Resign Because Why Take The Graceful Road Now?

TCDI Completes Its Acquisition of Aon’s E-Discovery Practice, Expanding Its Reach Into the U.K.