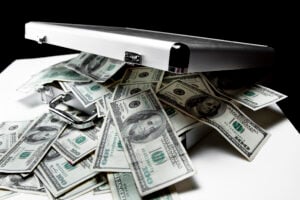 Ssshhhh… how could they know?

Few things grind my gears more than multimillion-dollar companies using bankruptcy to avoid paying out the money that they’ve hidden away. But enough about Johnson & Johnson snubbing cancer patients — this is about Biglaw. BakerHostetler, a national law firm specializing in business and tax, was recently accused of facilitating fraud in the order of about $100M.

A liquidating trustee for a reorganized pharmacy company has filed an adversary complaint in a Texas bankruptcy court, accusing law firm BakerHostetler of helping facilitate a $100 million insurance billing fraud scheme before the company filed for bankruptcy in 2017.

In the complaint filed on Sept. 26, trustee Yvette Austin Smith said Alliance Health Networks undertook a scheme to submit false insurance reimbursement claims for blood glucose testing strips that purported to be for supplying retail products, when in fact it was selling mail-order, not-for-retail strips that were cheaper than the retail items it billed for.

Wondering how somebody could go about this and think they’d get away scot-free? I hope you remember the finer details from your Corporations outline.

The suit accuses BakerHostetler of helping create a corporate structure that attempted to shield the company from liability for the alleged fraud, which Smith said cost the company and several test strip makers more than $100 million.

“Baker was fully aware of the company’s improper practices, but elected to assist Alliance’s efforts to hide its scheme by serving as Alliance’s first line of defense against [pharmacy benefit managers’] attempts to examine its activities,” the complaint said. “Baker helped Alliance evade scrutiny by designing a complex ownership structure that shielded the reality of Alliance’s ownership from PBMs that might have uncovered the fraud.”

No matter how complex the corporate structure, you’re gonna get damn near Enigma code levels of corporate cryptography when several thousands of dollars are on the line, let alone millions.

If you’d like to do some digging on your own, this should get you started:

The adversary suit is Yvette Austin Smith v. Baker & Hostetler LLP, case number 4:22-ap-03275, and the underlying bankruptcy case is In re: Uplift Rx LLC, case number 4:17-bk-32186, both in the U.S. Bankruptcy Court for the Southern District of Texas.

In the meantime, try not to get caught doing scams that would make Joanne blush.

Will fewer BigLaw firms match Milbank’s new pay hike for associates? At least 10 firms are on board

Is All Hope Lost For Biglaw Special Bonuses This Summer?