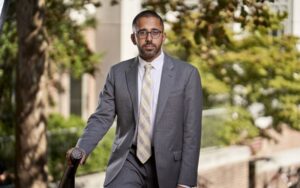 Tonight, Jeopardy is launching an all new professors tournament. On this inaugural episode, Gautam Hans, an associate clinical professor at Vanderbilt University Law School and director of the Stanton Foundation First Amendment Clinic, will appear.

Hans, who received his J.D from the University of Michigan, is reportedly a lifelong fan of the show. He calls the late Alex Trebek an “icon” — one Hans even dressed up like for Halloween in the third grade. He says it was one of the few shows his parents let him watch, since it’s educational.

Hans told National Jurist that being a lawyer has prepared him for the game show:

“Sometimes a question can be tricky or weird, and you have to say, ‘What are the clues in the question?’” he said. “When you see people make mistakes in the show, it’s very similar to how people make mistakes before a judge. That became very clear to me when I was watching and preparing.”

“Gautam is a beloved faculty colleague, a gifted teacher and scholar and one of the most engaged and engaging members of our community. We are very fortunate to have him at Vanderbilt, and we wish him all the best on Jeopardy.”

We’ll be watching to see how Hans does.

More Law Firms Step Up To Match Donations For Ukraine