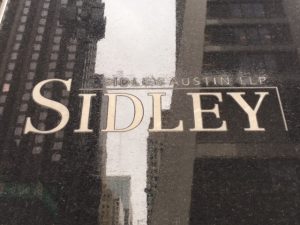 Okay, so at this point all Biglaw watchers know that, of all the employers stepping up to provide travel costs for employees who live in jurisdictions where abortion care — and potentially other reproductive health procedures — are banned, Sidley Austin has been targeted by the Texas Freedom Caucus (I know…  that name, ugh). Sus, right? The Biglaw giant received a letter from the Caucus last week threatening all manner of repercussions because of the firm’s policy.

But a new wrinkle has recently been revealed.

As reported by Reuters, Cody Vasut is both of counsel at the Biglaw firm of BakerHostetler and also a Texas state representative… as well as a member of the Freedom Caucus. Now my curiosity as to why Sidley is the only employer targeted by the Freedom Caucus is REALLY piqued.

BakerHostetler Chair Paul Schmidt had this to say about Vasut’s caucus targeting a rival firm, “His affiliation with the Texas Freedom Caucus is in a personal capacity and solely related to his legislative role.”

BakerHostetler has not responded to requests to find out if the firm will, like many of its peers, offer similar coverage of travel costs. Law students, only a few weeks away from early interview week (and potential laterals), take note.

All this hubbub also reminds me of that last time that BakerHostetler waded into controversial political waters. Jimmy Fallon was not impressed.

The Top Biglaw Firms In California (2023)

The Top Biglaw Firms In California (2023)

How to Collect Unpaid Child Support in New Jersey

Now Live At The Non-Event: Your Firm’s Bottom Line!