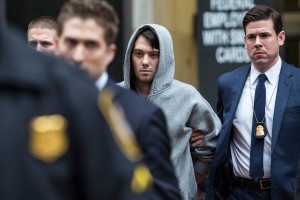 Things have really taken a turn for Martin Shkreli. The once successful pharmaceutical executive, hedge fund founder, and owner of a one-of-a-kind Wu-Tang Clan album earned the world’s hate and the nickname “pharma bro” after hiking up the price of the lifesaving drug Daraprim from $17.50 to $750 overnight.

Then came the lawsuits (numerous) and the jailtime (seven years), and now he’s so broke he can’t even pay his law firm’s legal fees.

Duane Morris, the firm that defended Shkreli against antitrust charges, recently asked a federal judge for permission to withdraw from representing their client, citing the fact that his outstanding bills haven’t been paid.

Reuters has the details on Shkreli’s continued fall from grace:

Duane Morris LLP said Shkreli’s former company Phoenixus AG agreed to cover his legal fees but has refused to pay the $2.04 million owed through March 31, after exhausting the limits of an insurance policy covering the fees in October.

In a filing in Manhattan federal court, Duane Morris also said Shkreli “has no assets” to pay its fees, and would not be harmed if it withdrew because the antitrust trial is over. The law firm said Shkreli did not oppose its withdrawal.

As Method Man once said, “Behind every fortune, there’s a crime.” Shkreli now seems to know that all too well — and he “has no assets” because of it. Ouch.

Martin Shkreli’s law firm has not been paid, seeks to withdraw [Reuters]

Proactive Strategies to Prevent Fines and Lawsuits in Your Business