Biglaw Is Filled With Some Elitist Jerks 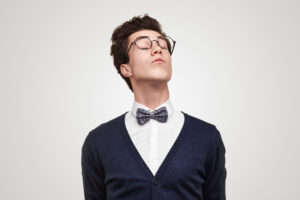 Ever since last week when Above the Law asked for your interview horror stories, tales of terror have been pouring in. And, please, keep ’em coming!

Today’s stories have something very specific in common — rude interviewers who just think they’re better than everyone else.

I was on a 2L callback at a large firm. It is important to know I went to a regionally well-respected law school, but not a national top law school, and for undergrad I went to a small alternative liberal arts college known for independent study. As part of this all-day interview I was to go to lunch with a senior associate and a junior associate. The three of us went into the elevator lobby to go down for lunch and an obviously senior partner was standing there.

The Senior Associate introduced me with “Senior Partner, this is interviewee. She goes to [Law School], but apparently she might have some other qualities that make up for that.” The senior partner and junior associate were clearly uncomfortable with this strange (and rude) introduction, but we shook hands and made small talk in an attempt to ignore it. But Senior Associate wasn’t done.

We got onto the elevator and Senior Associate turned to me and said, “You went to [College Name]. Isn’t that where people go when they can’t get into real Ivy League schools?”

Senior Partner and Junior Associate choked and kind of froze, but I’d had enough and turned to her and responded, “what a strange thing to say. No, [College Name] is known for self-directed independent study and intensive arts and writing. Honestly, I don’t think anyone who would be interested in an Ivy League would want to go there, it’s too unusual and unstructured – it only appeals to people who can handle that.” I then smiled at her and we all got off the elevator.

Most. Awkward. Lunch. Ever.

Glad the tipster could really shut that senior associate up! An awkward lunch is a small price to pay for that delicious comeuppance.

The next story speaks to an even more insidious type of elitism:

This is an old story but I remember it vividly. After graduating from UCLA Law School in 1975 I was clerking for a federal district court judge in Los Angeles. I was contacted by a representative of a very conservative old line firm and agreed to a lunch interview. There were three attorneys from the firm. Early in the interview I was asked where I lived and said I lived in West Los Angeles. A couple of minutes later a different attorney asked the same question and I said West Los Angeles again, feeling a bit perturbed that I wasn’t being heard. Toward the end of the lunch, the third attorney asked me where I lived and I smiled and said Pasadena, a more conservative city to the east of Los Angeles. They all smiled at me at that point and said something positive so I guess I finally answered the question right on the third try. They asked me to come back to the firm that afternoon for more interviews but I’d had enough. I told them the judge needed me in court and never contacted them.

Have a terrible tale to tell about an interview gone awry? Please send it our way by email, subject line “Interview Stories.” We’ll read all the submissions and share our favorites in these pages.

(And remember, as we’ve previously explained, “The ‘horror’ in ‘interview horror stories’ is loosely defined. Stories that are somewhat embarrassing or mildly amusing will suffice.”)

Not Even Superheroes Can Escape Their Law School Loans

From Biglaw To National Association For Law Placement