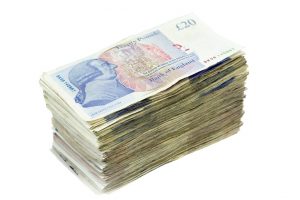 Biglaw is learning all about the whims of global finance. As most people by now have heard, the British pound has hit an all-time low against the U.S. dollar. And some big international firms with offices in the United Kingdom are feeling the pinch.

Some firms (Gibson Dunn, McDermott Will & Emery) establish their U.K. pay scale in pounds, without being linked to the dollar and the Cravath pay scale which dominates the U.S. offices. But there are other international firms that link their U.K. salaries to the U.S. Cravath scale, and deal with conversion rates.

One firm that operates off of the Cravath scale is Akin Gump, but the tanking pound has left them in a world of hurt. The firm sets the conversion rate quarterly and they’re seeing some radical salary shifts. Back in June, that meant starting salaries in their U.K. offices were £164,000 but in July they were £179,000. Those were set to rise to over £200k in the final quarter of the year… until they did something about it.

As reported by Roll on Friday:

But in light of the tanking pound, a source told RollOnFriday that Akin Gump decided to “stop converting” salaries at the “actual FX rate” and has introduced a collar (1.2) and cap (1.5) “that hasn’t been seen in years”. The insider said the firm made an internal announcement on Monday, just a few days before a new FX rate was expected to apply.

Akin Gump’s salary scale works out as follows (based on the 1.2 rate collar):

But they’re not the only firm instituting new exchange rate caps in light of the pound tanking:

RollOnFriday understands that Kirkland & Ellis uses a collar rate of 1.25 with a cap of 1.63, adjusted on a monthly basis (or whenever staff are compensated). The collar rate puts Kirkland’s NQs on a base salary of £172,000.

Other firms, such as Vinson & Elkins and Goodwin Procter, set the exchange rate for the year, meaning next year could result in a windfall for associates there. Neither firm has, of yet, announced how they intend to compensate associates.

What Do I Do if My Boss is Sexually Harassing Me?

‘Can you imagine waking up next to her every day?’