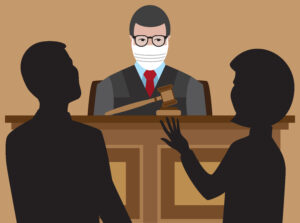 Listen, it’s a very nice thing to want to watch a colleague’s oral argument in person. But, when living through a plague, sometimes niceties fall by the wayside. Like when my mom had surgery, I wanted to walk her into the hospital, but COVID makes fools of us all.

And it turns out the U.S. Court of Appeals for the Federal Circuit takes their COVID protocols seriously. Last week, Judge Timothy Dyk issued an opinion criticizing a party for bringing four attorneys to an in-person hearing last fall. See, that’s two more than the protocols allow for. (The rules allow for only “arguing counsel and no more than one attendee whose presence is necessary to assist or supervise arguing counsel (e.g., a client, lawyer sitting second chair, or paralegal).”)

And, more to the point, the party had requested permission for extra folks to attend but were denied. However, they showed up the day of the argument — and were escorted out of the courtroom when they were spotted by a deputy clerk.

The opinion left the attorneys unnamed, but the National Law Journal sussed out exactly who they are:

The National Law Journal has identified the case as MV3 Partners v. Roku, which was up for argument on Nov. 3, 2021. Kasowitz Benson Torres partner Jonathan Waldrop argued the appeal, which related to patent infringement. The two attorneys asked to leave the courtroom that day were Kasowitz partner Darcy Jones and special counsel ThucMinh Nguyen. (Associate Paul Williams, who second-chaired the argument with Waldrop, was absolved of any violation.)

According to the opinion, the attorneys “felt it was not unreasonable for special counsel and the non-arguing partner to come to the court on the day of argument so that respondents could seek permission and clarification on whether they could attend the argument.” But that was NOT AT ALL the panel’s take:

But Dyk, joined by Judges Evan Wallach and Kara Stoll, ruled the attorneys “clearly violated the Revised Protocols.” Dyk noted that each signed a form upon entering the courthouse that declared under penalty of perjury that they were “scheduled to appear in person for argument at the National Courts Building in Washington, D.C. either as (a) arguing counsel or (b) to assist or to supervise arguing counsel.”

This language put them on “clear notice” that they could not be present as “spectators or additional attendees,” Dyk wrote.

“Most troubling,” he added, was the violation of the explicit order the court had issued just two days earlier. The lawyers should have filed a written motion for reconsideration or clarification “rather than simply show up at the courthouse in violation of the protocols to again seek permission to attend argument.”

The court declined to impose sanctions on the attorneys, “because respondents express earnest remorse, have not previously been accused of misconduct, and because this situation has not arisen before.”

But now folks are on notice, and the court’s protocols have been amended to add in bold type: “All counsel are advised that the court will not entertain any motions to expand access to attend argument beyond arguing counsel and the one necessary attendee.”

Top 10 Biglaw Firm Decides One Round Of Raises Isn't Enough