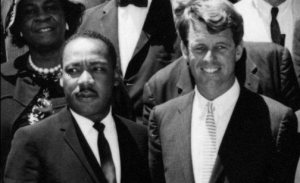 It’s Martin Luther King Jr. weekend, and as is tradition, somebody started it off properly by misusing the man’s legacy to shame Black people, their allies, and the causes MLK stood for in his lifetime. And who better than White & Case’s “Reply All” partner Thomas Lauria to start us off. 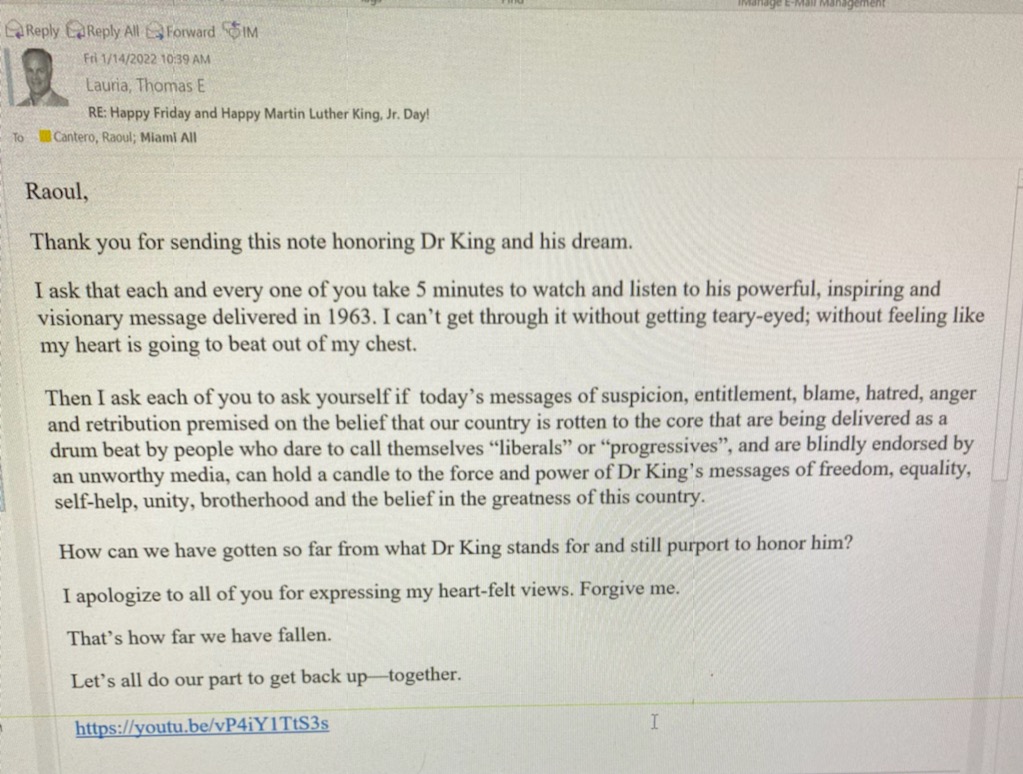 Now to his credit, Lauria did not actually say Black people or BLM, but much like when folks say “inner city youths”, we know who they’re talking about. I just get the feeling that when Lauria is talking about today’s messages of suspicion, entitlement, blame, hatred and retribution, he’s not talking about the people who stormed the Capitol and attempted to abduct and or kill congress people and the vice president about a year ago. I fear the consequences one would face if you called the average QHead a liberal or progressive after all.

When I read Lauria’s teary-eyed, heart beating email (he must have been vibing out to some really good, uncut MLK speech at the time) my mind darted to this specific scene of The Boondocks — I doubt I’m the only one:

That said, I’m going to take this moment to make a compilation of the things MLK actual said. One reason is that I think finding and listening to the words he cared enough to speak bravely on is a way to honor him. The second is that I know a bunch of Black folks will be inundated with unseasoned, decontextualized “I Have A Dream” quotes from Trump supporters with #BackTheBlue stripes on their The Punisher decals. Let this article be an easy go to for you when you get unsolicited and uniformed opinions on why MLK would actually be against police officers wearing body cameras or whatever.

Here is MLK talking directly to people who give lip service to civil rights but do nothing to actually support it:

Here’s MLK saying the people being subsidized for the government are the ones telling Black folks to pick themselves up by their bootstraps:

We love “I Have A Dream.” Its power and bold truths are often manipulated and misinterpreted.

But this is the seldom quoted and rarely publicized #MLK, speaking here about racial injustice + economic injustice.

These twin injustices contribute to the effects of #COVID19 today. pic.twitter.com/NAxmIG20Gj

Here’s MLK saying problems exist because of continued segregation and discrimination and that to ignore the causes and look only at effects is absurd:

Happy MLK day Canes fans. Here’s a video of MLK Jr. speaking at the University of Miami in 1966.

One of the most influential people in world history and a man who truly wanted to make the world a better place. #LoveOverHate ❤️ pic.twitter.com/l5KhA5Lr7P

And for when you get called a Communist Marxist Anarchist or something, here’s MLK saying America ought implement Basic Universal Income:

With all the kumbaya and harambe-ing from folks like Lauria, it is easy to forget that MLK was one of the most hated people in America during his life time. The vitriol seen toward BLM protestors? Yeah he got that in while he was still breathing. But you know what else happened? He talked. He talked a lot. And he wrote, too.  His life and legacy is so much more than the 1963 speech that gets thrown around when McDonald’s need a commercial or Black people get too uppity. Look for yourself — maybe even read a little.

In closing, let’s once again thank Lauria for doing the second most American thing possible to MLK — using his talk of love and equality to shame and shut up those scary Blacks that won’t leave us alone — be it Malcolm X or BLM protestors. And if you were curious, the third is locking him up for peacefully protesting (that’s how we got this gem after all). The first, of course, was murdering him.

Judge charged with tax fraud; man who got pig heart had criminal past

Cadence Counsel And Cargill Team Up For An Exclusive Search

Cadence Counsel And Cargill Team Up For An Exclusive Search

What Should a Worker Do if They are Being Sexually Harassed in Omaha?