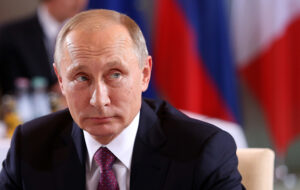 As Russia continues its invasion of Ukraine and the associated war crimes mount up, the role of Biglaw in building and maintaining the Putin war machine comes under increased scrutiny. While firms are leaving the country in droves — though some offer some cagey statements about the scope of this withdrawal — the question on everyone’s mind is “what did firms know and when did they know it?” Not necessarily as a legal matter as much as a moral matter.

One might have thought “right around when Putin invaded Ukraine in 2014,” but news travels slow when there are billables on the line.

Representative Steve Cohen of Tennessee has seen enough to conclude that at least some lawyers based in London knew the score when it came to their specific representations and has written the State Department asking that six lawyers be banned from the United States as part of a program to deter “foreign enablers of Russian oligarchs.”

The lawyers named in Rep. Cohen’s letter run the gamut from 8000 lawyer giant CMS, to mid-sized outfits like Harbottle & Lewis, to elite boutiques like Schillings:

• Nigel Tait of Carter-Ruck, who has acted on behalf of Kremlin oil champion Rosneft on abusive suits against Catherine Belton and HarperCollins and worked for Gennady Timchenko in seeking to stifle investigative reporting.
• John Kelly of Harbottle & Lewis, who represented Roman Abramovich in his abusive lawsuit against Catherine Belton and HarperCollins.
• Hugh Tomlinson, who represented Roman Abramovich, Mikhail Fridman, and Petr Aven in abusive suits against Catherine Belton and HarperCollins.
• Geraldine Proudler of CMS, who worked for Mikhail Fridman and Petr Aven in abusive suits against HarperCollins and worked for Major Pavel Karpov, formerly of the Russian Interior Ministry, in an abusive suit against Bill Browder.
• Keith Schilling of Shillings, who is well known for bringing abusive suits against journalists and worked tirelessly to protect the fugitive Malaysian businessman Jho Low, is accused by U.S. prosecutors of running a money laundering scheme to embezzle billions of dollars from Malaysian state investment fund, 1MDB. Schillings sent legal threats to UK booksellers to prevent them from selling a book about their clients that was published by reporters working for The Wall Street Journal.
• Shlomo Rechtschaffen, who is representing Walter Soriano, an enabler of Oleg Deripaska, Roman Abramovich, and Dmitry Rybolovlev, in an abusive lawsuit against Scott Stedman.

Working for Russian businesses isn’t necessarily a bad thing let alone an illegal one. But given the effort the Putin regime reportedly puts into laundering assets through a web of otherwise legitimate operations, working for Russian entities in recent years should have raised at least some no-pun-intended red flags. It’s up to firms to “know your client” enough to feel reasonably secure that the firm isn’t just becoming a cog in a shell game that, ultimately, produces tragic results.

UK Legal Week reached out to the firms involved to get their reaction to the allegation that they went over the line:

“We strongly reject the allegations of impropriety that have been made against CMS, and in particular Geraldine Proudler. We have reviewed the steps taken in our media litigation practice and are confident that these were compliant with all professional regulations as well as our wider responsibilities at the time,” a CMS spokesperson said.

“Congressman Cohen says he seeks to sanction lawyers who are currently performing work for Russian clients, but as we have said since the invasion of Ukraine, CMS is no longer accepting new instructions from Russian-based entities or from any individuals with connections to the Russian government,” the spokesperson added.

I’m not sure his letter is limited to lawyers currently working with the Russian government. The letter explicitly says, “individuals who have enabled,” which reads very backward looking. But the firm seems comfortable with its actions beforehand as well.

There’s that focus on what’s happening now again. Carter-Ruck also asserts that it properly followed “know your client” laws at all times, but it sticks out how much all of these responses put on “not anymore” when that’s not really the basis of the complaint.

In any event, the UK is looking into firms alleged to have breached its rules and will ultimately clear or condemn the lawyers involved.

But that’s not really the point of Rep. Cohen’s letter.

He’s not actually saying that the lawyers involved did anything illegal. In fact, the letter seems to operate from the premise that they didn’t do anything illegal because he argues that UK rules are too lax in the first place. Instead, the letter contends that, given a lack of outright violations, the United States should use its power to limit the privileges it chooses to grant as a mechanism to discourage lawyers who might lend their talents to the Russian regime now or in the future by denying visas to lawyers who already represented key figures in the Russian hierarchy.

There’s no question that these lawyers represented those folks — and that’s all his letter turns on.

The State Department’s response will be interesting.

Check out the whole letter here.

Earlier: Biglaw Firms Ditching Russian Government Clients Because It’s The Right Move
What All The Biglaw Firms Are Saying About Future Russia Business
Going Ahead And NAMING NAMES Of Lawyers Working For Russian Regime

Why You Should Avoid Quitting Before Finding A New Job

The Best Advice on How to Start a Law Firm Comes From A Judge!