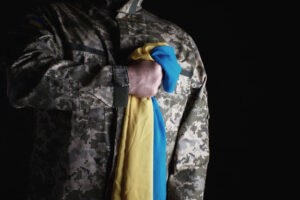 Taking the bar exam can be one of the most stressful experiences of a young lawyer’s life. With your future career as a practicing attorney at stake, your mind must be clear and all distractions must be kept at bay — unfortunately, that didn’t go as planned for Pavlo Bogachenko, a Ukrainian lawyer who’s been unable to leave the United States after taking the New York bar exam last week.

“Going into the exam, everything was silent and calm. The first day, everything was okay but there was the declaration by Putin that he’s recognizing the independence of Donetsk and Luhansk,” he told Above the Law. “There was no indication that things would escalate more.”

After the second day of the exam, Bogachenko, who specializes in commercial litigation and international arbitration matters, was so exhausted that when he returned to his hotel, he fell asleep almost immediately. “I was supposed to take an early morning flight to return home. And I woke up overnight not because of my alarm, but because I felt very, very worried. I turned on my phone. The first message I received was from my mother, and she said, ‘Please call me back when you read this.’” Russia had begun its unprovoked attack upon Ukraine.

Bogachenko’s family is from Odessa and he works in Kyiv. Both cities have been subjected to numerous military bombings since last week. He says that his family is doing all right, for the time being. “They all refuse to leave for different reasons: grandparents, because of their age, it’s quite difficult for them; parents, they refuse to leave for ideological reasons. They believe they need to be there, to stay there.”

He says if he hadn’t come to the U.S. to take the bar exam, he’d have stayed as well. “I’d be so happy to work with others to help save our country. The Ukrainian people have shown an inspiring and heroic resistance. They are all uniting as one against these unwarranted attacks.”

Bogachenko, who traveled here with his girlfriend, has been on the move ever since the bar exam ended. Without family here in the U.S., they’ve been staying with friends across the country for a few days at a time. Thus far, they’ve stayed in Chicago, where he completed his LL.M., and San Francisco. From there, they plan to stay in Los Angeles for a short time, and will then go to Miami. “The first 24 hours, we were extremely shocked and we couldn’t understand what to do. We’re here physically but mentally, we are monitoring the news 24-7 trying to do whatever we can do from here, by sharing information, and by sending support in any way we can.”

“It hurt us that our families are there and we’re stuck here. In the ideal scenario, nothing happens and everyone will be safe. But we don’t know what will happen. We would be happy to have our families somewhere outside Ukraine. But again, that’s not the case. We want to be with them and honestly, I personally regret that I came here for the bar exam, knowing now what happened almost immediately after I finished the test.”

According Bogachenko, Russia has committed numerous and severe violations of international laws and principles, including war crimes. If he were at home in Ukraine, and he had the choice between working as a lawyer and taking up arms to defend his homeland, he says the decision would be easy, though he admits, “Honestly, if it would be possible to do both things, I would do both.”

“My friends and colleagues are helping to build shelters, to build barricades, to collect first aid materials from pharmacies. And so I would have done the same, just patrolling the cities to find military diversions and prevent more horrible things from happening.”

As for the bar exam, Bogachenko told Above the Law that he was “pretty confident,” but that in his mind, the results don’t really matter anymore. “It’s not the priority right now. It’s unimaginable how our priorities, our values can change overnight.”

7 Tips to Avoid Legal Troubles with Your Social Media Accounts

7 Tips to Avoid Legal Troubles with Your Social Media Accounts

How Do I Choose A Digital Agency For My Franchise?