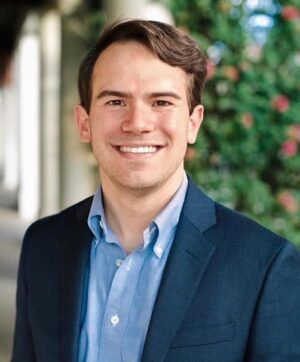 During the early days of the pandemic, Matt Margolis was an associate attorney in South Florida. Between managing his caseload and billing hours, he’d post funny law-related content on social media. Unfortunately, the partners at his firm weren’t too happy about it. “You’re an associate,” they reminded him. “Your job is to sit in that chair and bill lots of hours. Not to mess around on social media.”

At this point, most associates would’ve stopped posting. Not Matt though. He went the complete opposite direction and decided to double down on social media.

Today, Matt is the head of community at Lawtrades, where he’s responsible for creating engaging content for the legal community. Which is a pretty f—ing cool job, if you ask me. And he’s, like, really good at it. One of his recent Twitter posts received over 140,000 likes!

The content is so good because it’s so … relatable.

Like this one LinkedIn post discussing origination credit. It really struck a nerve. The post was inspired by a negative experience early on in his career — and is exactly why, today, he feels so strongly that all lawyers, regardless of seniority, should receive origination credit.

Relatable posts like these helped Matt quickly grow his social media following. His content is so compelling because it’s so authentic. “I couldn’t post about Biglaw because I’d never worked there,” Matt explained. “So instead, I talked about the struggles I experienced while working at regional law firms and in-house.”

Which is how he ended up being recruited by several legal tech companies, including a legal marketplace called Lawtrades.

Legal marketplaces are online platforms that connect freelance lawyers with potential clients. Kind of like Uber or Lyft, but for legal work instead of car rides. There’s a lot of demand for freelance lawyers these days, because they enable resource-limited corporate legal departments to get things done without having to hire a permanent employee or retain an expensive law firm.

It’s a great deal for the freelance lawyer, too. They can earn an impressive hourly rate while retaining the flexibility to work from wherever they want, whenever they want. Which, as we’ve learned, is something many lawyers desire.

Legal marketplaces aren’t exactly new. But in recent years, they’ve exploded in popularity, in part because of legal departments facing increased workloads, law firms raising their rates, and the increased popularity of remote work. These trends have also propelled the growth of more traditional staffing providers like Axiom as well.

That’s why it’s a pivotal moment for legal marketplaces like Lawtrades, and their peers, like Priori and Legal.io. They’ve all raised significant amounts of funding during the past couple of years to fuel growth. The marketplaces that can quickly sign up a critical mass of users will start to experience network effects — a powerful phenomenon that dramatically increases the value of something the more people use it.

Network effects are the driving force behind companies like Amazon, Doordash, and Airbnb. They’re “one of the only protective barriers in an industry where competition is fierce [and] are key to some of the largest technology companies on the planet,” according to Andrew Chen, a leading expert on tech enabled marketplaces and the author of “The Cold Start Problem.”

That’s why it’s so important for legal marketplaces to capture the attention of lawyers. Getting freelance lawyers and clients to sign up for your platform is incredibly valuable. The execution isn’t easy, though. Getting the word out about your marketplace can be challenging. Especially as traditional marketing methods have become incredibly expensive, in light of the rising costs of paid ads caused by Apple’s major privacy changes last year.

Enter organic social media. Right now there’s no better way to capture attention in a cost-effective way than to leverage social media’s powerful content distribution engine. A single viral post has the potential to generate millions of views. Lawtrades witnessed how other market-leading technology companies used social media to engage with the communities they served in unprecedented ways.

Matt’s timing was perfect. He emerged as the ideal candidate for the company’s new head of community role, and not just because of his social media savvy, by the way. It was also because Matt shared the company’s values — which becomes clear once you seen just a few of his posts.

“Lawtrades believes in the decentralization of the practice of law, where great lawyers don’t have to work at firms,” Matt explained. “They can work independently. And do great legal work while keeping all of their own origination credit.”

That to me is the most inspiring part about Matt’s entire story. He wasn’t hired because he somehow researched his way into the perfect job. His career trajectory wasn’t engineered. The opportunity came to him organically and precisely because of how he put himself out there authentically.

Interestingly, that’s the opposite advice many of us receive. You could probably imagine what Matt heard from other lawyers during the early days of his journey. “Is all this social media stuff really worth it? It’s just a silly hobby. You’re an attorney! You need to sit in that chair, put your head down, and keep billing hours.”

And yet that “social media stuff” is exactly what helped Matt get a job that was uniquely designed for him.

Look, I don’t know what the future holds. At the end of the day, we don’t know what will happen with social media. Or legal marketplaces, for that matter. It’s entirely possible that all of these trends will run their course, and the world will go back to being how it was before. And maybe those of us with these unusual jobs in legal tech will have to go back to doing something more traditional.

But even then, is it wrong to go off the beaten path? How many late-career lawyers regret never acting on their career hunches? How many of us stay at jobs we don’t like, for way too many years, and never get to tap into our greatest strengths?

It’s tempting to rationalize playing it safe. Especially when the only advice you hear is from experienced lawyers who succeeded in a very different world, under a completely different set of circumstances.

The takeaway here isn’t to go on social media and start posting funny tweets. It’s not even necessarily to go into legal tech or make a big career change. My whole point is this: Successful careers are non-linear. The world isn’t a ladder, it’s a jungle gym. You can go off the beaten path and do something that feels risky, and end up much, much better off.

At least that’s what I’m taking away from all this.

Alex Su is currently the Head of Community Development at Ironclad, a leading legal technology company that helps accelerate the contracting process. Earlier in his career, he was an associate at Sullivan & Cromwell and clerked for a federal district judge. Alex graduated from Northwestern Pritzker School of Law, where he was an editor on the law review and the student commencement speaker. In his free time, he writes about his career journey and legal tech in his newsletter Off The Record. You can find Alex on Twitter or connect with him on LinkedIn.

What Kinds of Protection Does a Homeowners Insurance Policy provide in Missouri?

Ilya Shapiro Won’t Be Teaching At Georgetown. Here’s Why We Should Care.

Ilya Shapiro Won't Be Teaching At Georgetown. Here's Why We Should Care.

This Biglaw Firm Has The Asia Market On Lockdown

The Commonwealth – An Engine For Legal Innovation?