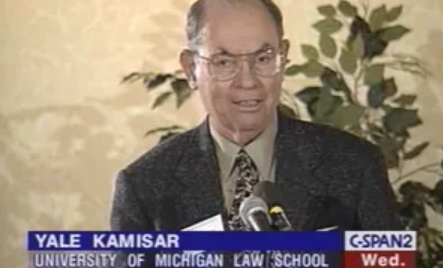 Yale Kamisar, a professor at the University of Michigan Law Schoo, in January 2000. Screenshot from C-SPAN.

Yale Kamisar, a professor at the University of Michigan Law School who influenced landmark U.S. Supreme Court decisions on the rights of criminal defendants, has died at age 92.

Kamisar died Jan. 30, report the New York Times and the Detroit News. He had retired from the University of Michigan Law School in 2004 after spending nearly 40 years there.

Kamisar was known as the “father of Miranda” because of his influential article cited by the Supreme Court in Miranda v. Arizona. The 1966 Supreme Court decision banned the use of a suspect’s police statements at trial unless officers had warned of the right to remain silent and the right to counsel.

Kamisar’s work was also cited in the Supreme Court’s 1963 decision Gideon v. Wainwright, which extended the right to counsel in criminal cases to the states.

The two cases were among more than 30 Supreme Court decisions that cited Kamisar’s work, according to the New York Times.

“He really was a giant in the field—the father of Miranda isn’t a lightly given nickname but rather a well-deserved characterization,” said Evan Caminker, dean emeritus of the University of Michigan Law School, who spoke with the Detroit News. “Both the intellectual force of his legal analysis and the passionate force of his voice significantly enabled, informed and guided the Warren Court’s effort to rein in all-too rampant police abuse that threatened constitutional values far outside the courthouse doors.”

Kamisar is a graduate of Columbia Law School. He taught at three law schools before he joined the University of Michigan.

Kamisar was also a platoon leader in the Korean War who received a Purple Heart for wounds suffered while leading a successful charge against the Chinese Army.

Can You Fire an Employee for Threatening to Sue?

What are the Penalties for Sexual Harassment?

What are the Penalties for Sexual Harassment?

Are You A Capital Markets Associate Looking For A Broader Practice?

Homeowners Insurance Claim Denied in South Carolina? Don’t Take No for an Answer!