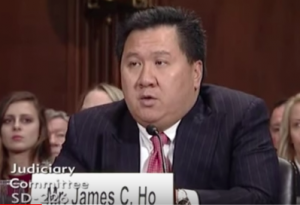 Raise your hand if you thought the right-wing Yale Law School clerkship hiring boycott was ever a serious proposal? So, I’m seeing the Yale Law administration with its hand up and… no one else? Not even the two judges behind it? Cool.

The Fifth Circuit’s Judge James Ho and the Eleventh Circuit’s Judge Lisa Branch took the stage at Yale Law School yesterday to explain their plan to boycott hiring Yale graduates as clerks as a protest against liberal law students protesting a speaker from a recognized hate group. From the beginning, this proposal made no sense since, by design, the proposed boycott punishes Yale’s Federalist Society members, who have arguably done the best job of any chapter in the nation when it comes to drumming up outrage over “free speech” problems on campus, often at the expense of the facts. No awful deed goes unpunished, huh?

Despite the complete transparency of the ploy, Yale’s administration beclowned itself over the whole affair, inviting the two judges to speak as part of a broad effort to appease the squeakiest of wheels that included unveiling a new set of speech guidelines aimed at squelching students from expressing dissent on campus.

There’s a non-zero chance that Yale Law would put its entire endowment in cryptocurrency today if you told them it might cost them an appellate clerkship.

Unlike the administration, a student at the event seemed to see right through the proposal and asked Judge Ho how a plan that would only deter conservative students from attending Yale would increase conservative viewpoints on campus. Despite this being the foundational question surrounding Ho’s boycott, the judge responded as if this issue hadn’t crossed his mind.

“It’s not something I want to do,” Ho said. “If someone has a better idea, I am all ears. The objective is very simple, it’s to restore free speech and especially to restore free speech at the elite institutions that are most influential on the entire American society. … There’s no question Yale is amongst, if not the, most acclaimed law school on the planet. That carries with it enormous influence.”

To recap, this is the federal judge behind a bold, public effort to boycott Yale Law School admitting that it’s a threat that he never really planned to follow through on and that hadn’t worked out how the gambit would actually “restore free speech” by making Yale even more ideologically homogenous. For her part, Judge Branch said the “greatest hope” would be that the boycott never takes effect.

Honestly, it’s the ultimate power move to not even attempt to formulate a justification for your ploy during the actual victory lap for gaming a law school. Respect.

For what it’s worth, ideological diversity isn’t actually relevant to free speech as a concept, though it is crucial to the bastardized collection of right-wing grievances animating Ho and Branch. Instead of a principle protecting the right of people to express opinions, their “free speech” rallying cry is more concerned with compelling people to passively absorb opinions. A sort of “compulsion as freedom” model designed to shield opinions from scrutiny… specifically the opinions that these judges prefer.

When free speech is unmoored from the premise that society benefits from a free exchange of ideas for the purpose of developing consensus or at least cultivating nuance — a premise that necessarily requires some ideas to become disfavored and rejected over time — and instead fixates on protecting and promoting disfavored ideas as a virtue unto themselves, it ceases to be a freedom and becomes a command. A command that schools (or companies or the government) punish speaking out against an opinion as a threat to a disfavored idea. “Orwellian” is an overused term, but this is one of those instances where it’s on the nose.

It’s also an approach that crumbles under its own contradictions as evidenced by Judge Branch’s unintentionally hilarious attempt to square her worldview with reality.

She recounted an experience when she attended law school in which a Holocaust denier was invited to speak at the campus, and said the speaker was never invited back after students chose not to attend.

What a shame! If only students had shown up to ask tough questions maybe they could have brought the Holocaust denier back to campus. Such an sad act of cancellation. Where was the respect for free speech?!?!?!

In all seriousness, this is a bizarre admission to make during an event where she is — ostensibly — arguing that students must sit and listen to hate groups when invited to campus. The judges literally called on the school to “stop the cancellations” and then offered the inspiring anecdote about canceling a speaker?

And yet it’s the most critical admission. The judge’s classmates organized a boycott of a Holocaust denier because, contrary to the premise of this farce of a complaint about Yale, her classmates didn’t need to listen to a Nazi propaganda event to understand it.

People don’t actually need to go to a live event and listen to a speaker to form valid opinions about that person’s views. A speech on campus is not some unicorn event where students have one and only one opportunity to learn about some viewpoint. Students, in particular law students, can read and research and investigate without having to plop down quietly to hear to a speech.

It’s wildly condescending to suggest that YALE LAW SCHOOL STUDENTS just hadn’t thought hard enough about LGBTQ rights to form an opinion that a recognized hate group targeting gay people is a bad thing. Of course they did… and that’s why they boycotted and protested the speech just like Branch’s peers did to that Nazi.

There’s an undeniable virtue in being exposed to bad ideas… there’s no virtue in forcing people to constantly take remedial courses in ideas they’ve already reviewed, scrutinized, and rejected. Society moves on, even if some people want to use force to slam the brakes.

But to Judge Branch’s credit, there is a benefit to some tough Q&A. It certainly taught us a lot about how badly the judges managed to scam Yale Law.

Earlier: Yale Law School Invites Boycotting Judges To Campus… Totally Not Cowardly Desperation At All!
Your First Amendment Right To Sit Quietly And Not Say Anything
James Ho Cancel Cultures Yale Law FedSoc Because Other Students Are Mean To Yale Law FedSoc Students

The Hours At The Best In Biglaw ARE Getting Longer