Federalist Society co-founder and co-chair of the organization, Northwestern Law’s Professor Steven Calabresi, is living the internet meme of “how it started/how it’s going” in real-time this week.

On November 3, the Yale Daily News wrote a detailed article about the anti-affirmative action efforts at the Supreme Court linking the legal assault to right-wing donors with deep ties to the Federalist Society. Professor Calabresi felt obliged to write a letter to the editors on behalf of the besmirched organization: 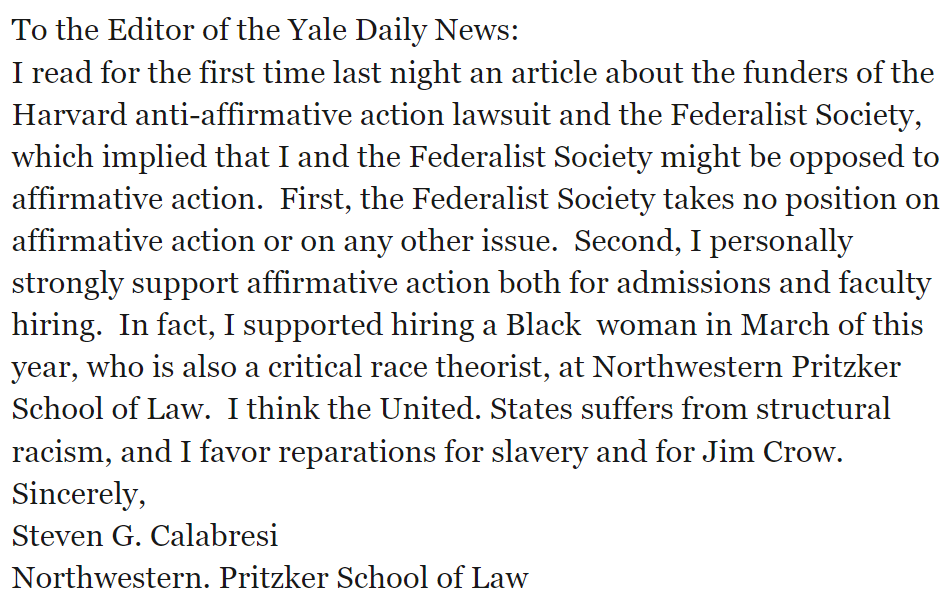 Despite Calabresi’s protests, the article doesn’t actually say that the Federalist Society is opposed to affirmative action, just that the people who are doing that also happen to be big time FedSoc donors. It’s almost as if, despite posturing as a non-partisan debating society, the FedSoc is a networking hub for far-right interests. Put another way, Calabresi can be the shy guy at the nudist colony, but he’s still at the nudist colony.

In his effort to prove just how non-partisan the Federalist Society can be, Calabresi notes his strong support of affirmative action, critical race theory in law school, and reparations for slavery and segregation. Bringing us to…

At least Stalin had the courtesy to wait until Nikolai Yezhov was dead before erasing him from the picture.

Did the Board — where Calabresi is still co-chair, mind you — take this vote in light of his comments? There’s no official word, but it’s impossible not to connect the two.

Gosh. It seems like only yesterday that the Federalist Society went on a lengthy sarcastic rant about how ridiculous it was that journalists might suggest that the organization is obsessed with ideological purity. Oh wait, it WAS only yesterday.

Don’t worry, Professor. There’s plenty of room over here on the FedSoc enemies list. I’d be happy to show you around the clubhouse!

Am Law 100 Firm Lassos A Cravath Match For Associates