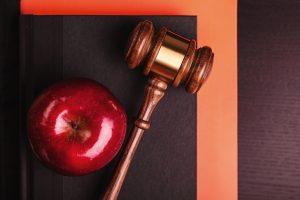 Few things change the pace of life like a nice flight elsewhere. Sure, 90 hour work weeks suck, but they’re a bit more manageable in the Bahamas. When you only have to be in the office three days a week, why not? Baggage claims. The answer is baggage claims. The only thing worse than mid flight turbulence as you cross the Bermuda Triangle is post-landing wait with everyone else as the conveyor belt moves at a snail’s pace. Unfortunately, some folks’ arrival is made even worse when their luggage pulls an Amelia Earhart.

[A] traveler reported that her suitcase with more than $1,600 had not made it to her final destination after a flight into Destin-Fort Walton Beach Airport. That traveler, however, had an AirTag in her bag and noticed in the Find My app that it had last been activated in Mary Esther, Florida.

A second traveler flying into the same airport recently reported that his checked bag arrived at the final destination missing more than $15,000 worth of jewelry.

I can’t totally rule out that this is just a brilliant Apple campaign ran by Jordan Peele. Remember those classic Mac v. PC commercials? If this fact pattern presented itself back then, there wouldn’t have been any competition left.

The investigators from the sheriff’s office used the airport’s database of employees to find those who lived within the vicinity of the location where the first victim’s AirTag had last been seen in the Find My App. This led the investigators to 19-year-old Giovanni De Luca, an airline subcontractor at Destin-Fort Walton Beach Airport.

Once officers made contact with De Luca last week, he admitted to removing the AirTag from the first victim’s suitcase. He didn’t do this quickly enough, however, since the AirTag still helped investigators track him down. He has been charged with two counts of grand theft.

When you consider that a $30 AirTag saved an (un)lucky traveler $1600 and city tax dollars that would have went toward finding a perpetrator, its hard to not sing the praises of big tech. It almost makes up for stalkers using AirTags to keep tabs on their victims.  Goes to show that sometimes you live long enough to be a hero.

How Much Do Small Firm Lawyers Make?

Ukraine-Based AXDRAFT’s Resilience In The Midst Of War

Ukraine-Based AXDRAFT's Resilience In The Midst Of War

Spring Has Sprung, And So Has The Cash Compensation At This Top 50 Biglaw Firm

Reasons Insurance Claims in Metairie May Be Underpaid