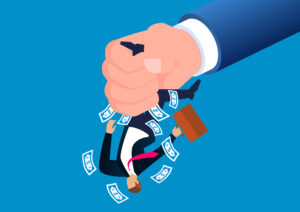 Approximately one million years ago — that is, January 2020 — we first told you about the hot water former Vedder Price partner Robert Hankes was in, seeing as he was facing a disciplinary complaint by the Illinois Attorney Registration and Disciplinary Commission.

Hankes, a one-time member of Vedder Price’s transportation finance team, faked invoices for more than $100,000 in fraudulent payments to client. Hankes was allegedly terminated by Vedder Price on Oct. 2, 2019 over the scheme, which had begun in January of 2018. Hankes was home grown at Vedder Price, he began working there in 2005 as a summer associate, and was made partner in 2014. Before joining the firm, Hankes, also a CPA, was auditor at Arthur Andersen and a financial analyst with Winston & Strawn.

Now according to a January 20th order, Hankes won’t be a lawyer — at least for the next three years. The Illinois Supreme Court has suspended him, what with the double-billing and faked expense reports.

ABA Journal reported on the scheme:

Hankes billed the financial institution and its customers for the same legal work, wrongly collecting nearly $109,000 that he applied to the reactivated account, the review board said. He also billed another client nearly $7,500 using a false invoice, according to the review board.

But those weren’t the only issues. According to the review board, Hankes also sought reimbursement from the firm for expenses unrelated to the firm, such as $2,100 for nonexistent a “client event” and “race day,” ~$2,600 for a crossbow, purportedly for a gift, and ~$17,000 for first-class plane tickets he never used (the flight credit went instead to his personal credit card). The review board say Hankes banked almost $80,000 this way.

In deciding his fate, there were mitigating factors:

Hankes made restitution on the eve of his disciplinary hearing, the review board said. Other mitigating factors were that Hankes admitted his wrongdoing when confronted by Vedder Price’s general counsel, self-reported his conduct to ethics authorities, and was forthright during the ethics hearing. He also had no prior discipline and a history of significant pro bono legal work.

In 2020, Vedder Price said the money scammed from clients was returned.