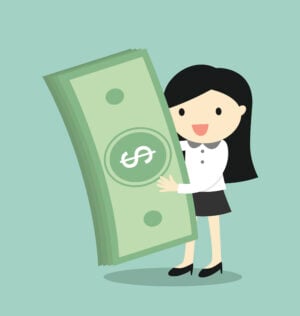 I, like many other brilliant, modest, and well-dressed WashU alums have spent countless hours asking myself what life is all about. And yes, a law degree can prepare you to be an attorney or whatever — but the fun people know the cool gigs are J.D. advantage types, like culturally informed TikTok chef. Thanks to Rachel Vinson, we can add a new one to the list: dating show contestant.

Now I’m not sure how dating show OCIs work, but this application is pretty damn good. It is cool to know that an alum of my alma mater managed to make it through college and grad school debt free. Who knows, maybe she could spare some advice we Bar Tabers ™ could learn from.

Until then, I’m sure seeing her acting chops on the TV will be a great distraction from whatever class or matter you should be preparing for. The schtick of the show is that one guy is rich and the other isn’t, but I get the feeling that Ms. Vinson will be fine either way.  Catch her on Joe Millionaire via Fox, Hulu, Tubi, or whatever other sources you use to stream some good TV. Just not Pirate Bay. Definitely not Pirate Bay. Is that still a thing? Don’t do that. And who knows, if they need some broke guy to look the part of a wealthy one for next season, I might be able to move some stuff on my schedule around.