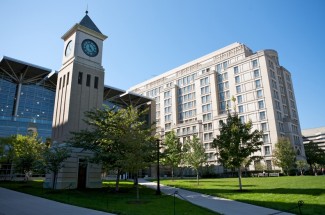 Shapiro was placed on leave before his Feb. 1 start date as executive director of the Georgetown Center for the Constitution, report Law.com, Reuters, the New York Times and the Washington Post. The New York Times described Shapiro as a “prominent libertarian.”

Shapiro had tweeted last week that objectively, the best U.S. Supreme Court pick by President Joe Biden would be federal appeals Chief Judge Sri Srinivasan, but “we’ll get [a] lesser Black woman” instead.

That tweet and others about Biden’s pledge to nominate a Black woman to the Supreme Court have since been deleted. Shapiro apologized for what he deemed an “inartful” tweet.

Later, Shapiro tweeted a longer statement saying he regretted his “poor choice of words, which undermined my message that nobody should be discriminated against for his or her skin color. … So blatantly using identity politics in choosing Supreme Court justices is discrediting to a vital institution.”

William M. Treanor, the dean of Georgetown Law, announced Monday that Shapiro is on administrative leave “pending an investigation into whether he violated our policies and expectations on professional conduct, nondiscrimination and anti-harassment.” Treanor said the results of the investigation “will inform our next steps.”

“Ilya Shapiro’s tweets are antithetical to the work that we do here every day to build inclusion, belonging and respect for diversity,” Treanpr wrote. “Racial stereotypes about individual capabilities and qualifications remain a pernicious force in our society and our profession.”

These are Shapiro’s tweets:

• Biden’s nominee “will always have an asterisk attached” because of Biden’s pledge to nominate a Black woman. “Fitting that the court takes up affirmative action next term.”

• “Is Joe Biden racist and sexist for saying his Supreme Court nominee will be a Black woman?” Readers were asked to pick one of four answers: “racist,” “sexist,” “both” or “neither.”

More than 600 Georgetown Law students and alumni have signed a petition calling for Shapiro’s firing, according to Reuters. The New York Times put the number at more than 900.

Shapiro told several publications in an email that he is “optimistic that Georgetown’s investigation will be fair, impartial and professional, though there’s really not much to investigate.”

“I’m confident that it will reach the only reasonable conclusion: My tweet didn’t violate any university rule or policy and indeed is protected by Georgetown policies on free expression,” he said.

His continued employment is supported by more than three dozen professors in a letter to Treanor. They said firing Shapiro would send a message “that debate about matters having to do with race and sex is no longer free.”

How Much is the Minimum Capital Required to Join a Home Building Franchise?

5 Tips for Protecting Your Business Against Litigation