Helen Wan, Attorney And Author Of ‘The Partner Track,’ On Bringing Her Biglaw Novel To Netflix 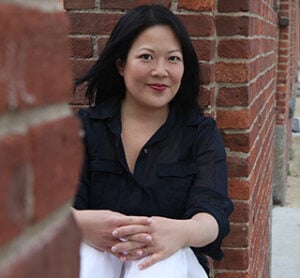 “And blame postmodern things I can’t relate / Like summer camp in coastal states / Like alcohol and coffee beans / Dance floors and magazines / I think it’s safe to say I’ve only got myself to blame.” — The Format

This week, I had the opportunity to catch up with Helen Wan — an author, lawyer, and speaker on DEI and women in the workplace.

Wan is a graduate of Amherst College and The University of Virginia School of Law. Wan’s novel, “The Partner Track,” follows idealistic young lawyer Ingrid (played in the series by Arden Cho) as she competes to climb the partner track at a New York law firm, premiered as an original Netflix series last month.

I’ve covered the lack of diversity in the media time and time again (see here, here, and here), so I won’t digress on how critical representation is to our industry specifically and society as a whole.

Wan’s story from the launch of her book to the landing of an original Netflix series is a testament to her hard work, grit, and the realization of dreaming big. It was incredible to learn about the rocket ship and roller coaster (rocket-coaster) trajectory of “The Partnership Track” as well as the trials and tribulations she’s faced throughout her career.

After speaking with Wan, I couldn’t help but want to write my own story. And I believe you will too after hearing more about her journey of bringing her novel to our television screens. Without further ado, here is a (lightly edited and condensed) write-up of our conversation:

Renwei Chung: You started writing “The Partner Track” 23 years ago, it was published in September 2013, and premiered on Netflix as an original TV series last month. Can you believe it?

Helen Wan: This has been a thrilling roller coaster ride. To be honest, I still wake up some mornings not quite believing any of it. It’s very much a Cinderella-at-the-ball feeling.

RC: Can you discuss the process of bringing the book to life on our living room screens?

HW: Sure, how much time ya got? Ha. It only took me 23 years from the day I originally took pen to paper, on my subway commute to and from work, to seeing these Parsons Valentine lawyers live and breathe on my TV. There were so many stops and starts along the way.

Even when an author is lucky enough to have a work published, let alone optioned, all the stars must align to end up with a TV series! And they didn’t, at least not for a long time.

By the morning I received the astounding news from my agent: “Hi! Are you sitting down? I believe Netflix wants to make a show out of your book!” I had honestly almost written off the possibility. I’d never truly imagined all of the stars aligning the way they did, for this to happen.

So when I finally curled up and binge-watched all 10 episodes of the show one recent weekend, it was magical. It was the kind of smart, sexy, savvy show that, if I’d just randomly stumbled upon it one night while looking for something new to watch, I would honestly have loved it then, too. And that was a happy thing to find out.

RC: What was your inspiration for the epigraph by Ruth Bader Ginsburg: “I would not like to be the only woman on the Court.”

HW: Oh, I’ve always loved that quote from the Notorious RBG. Her life and legal career already made her a role model. But that epigraph is meaningful to me for another reason.

I dedicated “The Partner Track” in memory of my grandmother, An Ching Chun, who was 14 years older than RBG. Both of them were amazing, incredibly intelligent, resilient women who inspired me.

Through circumstance, one of them fled the Chinese Communist Revolution as a very young mother and ultimately landed as a stranger in Mei Guo (literally translated: the “Beautiful Country”) and the other ultimately became a Supreme Court Justice of the United States. I like to write a lot about timing and circumstance, and how they impact life outcomes.

RC: It is still so rare to see an AAPI woman protagonist on television or at the movies. How can we ensure more of these stories are told in Hollywood and the media in general?

HW: That one’s easy. One must walk the walk AND talk the talk. Meaning, if you really love something, and you believe it’s a story worth telling, and you wish there were more stories like it out there, getting in front of eyeballs, then you gotta put your money where your mouth is.

Watch the show. Buy the book. Go see the play or movie. And tell all your friends and neighbors! I know it’s not popular to say this, but the truth is, making art IS also a business.

RC: You mentioned the 1988 film “Working Girl” as a strong influence on some of the themes in “The Partner Track.” Can you elaborate?

HW: Oh, I could go on all day about that brilliant movie! Talk about a dream team of director Mike Nichols (who also directed another of my favorite films, ‘The Graduate”), Melanie Griffith, Sigourney Weaver, Harrison Ford, Joan Cusack, and the list goes on. Actually, I just rewatched it recently. Almost 35 years later, it still strikes such a cultural chord.

I think everyone loves a great Cinderella story, especially when our hero is so believably flawed and vulnerable, and underestimated. I mean, who wants to read (or write!) about a perfect person, who never makes mistakes? Boring!

That end scene, when Tess meets her new assistant, goes into her new office, takes a giddy first spin in her swivel chair, and that gorgeous Carly Simon song swells and the camera breezes out to a view of the whole city, still gets me. Every single time. That movie is also a cinematic valentine to New York City, which I love.

RC: You read a snippet of the summer outing scene during your interview with Sunni Yuen, a member of Google’s Legal Department back in January 2014. It is featured in Episode 5 “Out of Office” — how did it feel to witness this scene on the television screen?

HW: The firm retreat was my favorite chapter to write, and now it’s my favorite episode of the show (Episode 5: “Out of Office”). I watched it and, literally, I laughed, I cried, it was better than “Cats.” I picked up the remote and rewatched it immediately. Then I called Georgia (Lee) to tell her how much I loved it.

I still find myself humming that beautiful Lake Scene song when Rachel and Justin are stranded on the water. It’s called “Around Here,” by a really talented singer-songwriter named Matt Holubowski, and I think his music adds perfect context to that setting.

HW: I was impressed with the way this show takes a book about a law firm and makes it an entertaining “TV SHOW!!!” Yet it still captures the thornier themes and topics I tried to address with my novel. I think it’s a fairly successful combination of “Hollywood entertainment” and verisimilitude.

It is, after all, a TV series that seeks to entertain and enlighten. And who wants to watch a “100% authentic” show about, say, me drafting an asset purchase agreement at 2 A.M. at my desk, eating takeout in my gray college sweats? I mean, I personally think that would be a really, really boring TV show. Haha.

RC: I’ve heard many law schools and professors leverage last month’s series premiere of “The Partner Track,” based on a book published almost a decade ago, to teach current lessons to this year’s 1Ls and other legal cohorts. Why do you think “The Partner Track” has struck such a chord in the legal community?

HW: Yes, I’m hearing from a lot of law profs and law partners and just people in general who tell me my novel may have been a bit “ahead of its time.”

I think what they mean is, we’re clearly at a different cultural moment right now, a critical moment when many more people are willing to both read and listen to and talk about stories like Ingrid’s. And Tyler’s. And even Murph’s. And I hope we’ll get a chance to continue telling these stories! There’s a lot more story to tell.

RC: Of course, I must bring up the A.1. Sauce scene! Are you getting as much response to it nowadays as you did when the book was published?

HW: Yes, I definitely hear from a lot of readers, and now TV viewers, for whom that A.1. Sauce scene resonates. And I don’t just mean lawyers and law students.

I think everyone has their own A.1. Sauce Moment at some point in their lives, right? I don’t know anyone who hasn’t felt like the “Outsider” in one way or another. Not even, dare I say it, Dan Fallon!

RC: Any advice for someone wanting to balance a legal career with a creative side hustle?

HW: Never assume it’s impossible. If you truly believe in the project, don’t give up. I’m glad I didn’t.

On behalf of everyone here at Above the Law, I would like to thank Helen Wan for sharing her story with our audience. We wish her continued success in her career. Helen can be contacted via her website: www.helenwan.com, Twitter @helenwan1, and representation: josh@hgliterary.com.

Renwei Chung is the DEI Columnist at Above the Law. You can contact him by email at renwei@footnote4.com.

Biglaw May See ‘Targeted Firings’ Instead Of Mass Layoffs

A Letter To A New Associate: 2022 Edition

At The Pinnacle Of The Profession: Latinos And Latinas Making Strides In Am Law Firm Leadership

From Equity Management To Liquidity: How Morgan Stanley At Work Is Supporting Top Law Firms