How I Stopped Worrying And Learned To Love The Bar Exam

I’ll be upfront with you — this title was pure clickbait. The bar exam sucks and based on our past coverage of its myriad snafus, I wouldn’t hold my breath on reading a different take on here.

That said, like death, taxes, and hearing unsolicited details on whatever new celebrity drama is playing in a courtroom, the bar exam is one of those quicksand-esque parts of the profession that gets harder to escape the more you struggle against it. Studying for the bar exam is about as relaxing as doing a Mike Tyson impersonation in front of the man himself. As nice as it is to learn about appeasements from the heir apparent of an apparent creator of penne alla vodka, I’d rather get sent by Carole Baskin to check on a tiger cage than sit through another one of those lectures. And if, despite your studious studying, you still feel the way that I do, I’d like to direct you to a post some dude made in a Law School Meme Group™ that I thought was worth sharing: 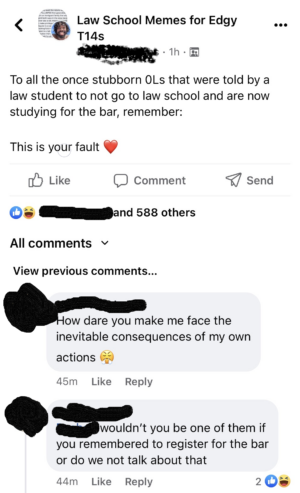 You chose this. And as cathartic as it is to go on Reddit and commiserate with your fellow Kaplan inmates about how far behind on the study plan you are, it is important to remember that you aren’t as powerless as that damned progress bar can make you feel.

You’ve got this. Hopefully the first time. If not, maybe you’ll pull a Michelle Obama. Take a breath or two. Sleep. Drink water. Actual water — vodka does not count. And when it really gets rough, remember your Homer and your Nietzsche.

“If we have our own why in life, we shall get along with almost any how.” – Friedrich Nietzsche, Twilight of the Idols

If You Feel Abandoned by Your Home Insurance Company, Here’s What You Need to Do