If The ABA Eliminates The LSAT, What Will D-Bags Cite As Their Pick-Up Line? 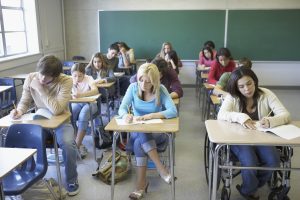 After years of squabbling over whether law schools should be allowed to consider the GRE, it looks like we might end up getting rid of entrance exams altogether. The ABA effort to amend Standard 503 to make all admission tests optional for accredited law schools still has a few weeks left in the comment period, but the momentum seems squarely behind junking the requirement.

The push to open up the rules to let law schools consider the GRE if they wished reflected concerns that having a dedicated legal entrance exam deterred quality applicants who already take the GRE for grad school applications. Allowing these folks to use that test for law school could increase the pool of potential law students or so the thinking went. But while traditionalists got up in arms over the loss of the LSAT’s monopoly on admissions, folks started to ask why the ABA was in the business of telling admissions how to do their jobs in the first place.

Standardized tests can be biased, but they can also smooth out differences in applicant transcripts. It’s not like GPAs translate well from school to school. The few public comments opposing the new rule leaned on this role, with an international applicant hailing the exam as the only way to fairly compare students coming from schools outside the U.S. and another noting that law school is “extremely elitist and caters to the wealthy in just about every way possible” with the LSAT being the great equalizer.

But most of the comments approved of the change:

“I believe by eliminating the standardized test requirement the legal field could possibly become more diverse and inclusive,” Jameelah Kates, who identifies as an “African American woman,” wrote.

“The LSAT is a test that is like no other,” commenter Shirley Jervis wrote. “I am Hispanic and bilingual. I please ask for a person not to be measured by a score to be accepted into Law School.”

Further, some commented about the challenges of the LSAT for people with disabilities.

“I am currently studying for the LSAT and I suffer from ADHD and PTSD,” Tamere Briley wrote, saying the test shouldn’t be required for admission to law school.

Personally, I like the LSAT and think it behooves law schools to require standardized testing… but they absolutely need to pass this rule and eliminate the requirement.

The test has proven a pretty good indicator of law school success and does smooth out the difficulties inherent in comparing GPA resumes, so admissions should continue to choose to require a score. But the existence of this requirement has handcuffed the admissions process to the LSAT. Every law school has to consider it… so US News can easily rank all the schools on their average score… so law schools have every incentive to lean more on the score. There’s no incentive to exercise some judgment and elevate a great candidate with a bad score over a mediocre prospect with a lovely score to report.

Even if schools continue to ask for scores, the mere fact that they aren’t required to should break the test’s dominance as a metric. Frankly, schools should stop reporting LSAT scores as soon as the test becomes optional.

But none of the comments addressed the real victim of this proposed rule, the absolute tools who use their score as a pickup line at the law school watering hole. We all know it happens. We’ve probably all seen it happen. And if we get rid of the testing requirement, what’s going to happen to those guys? Will they have to develop an actual personality?

Won’t someone PLEASE think of the douchebags?