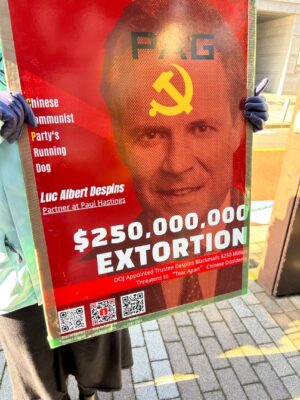 One court order didn’t do the trick. Another issued this month doesn’t seem to be doing much either. No matter how many times the justice system tries to clamp down on the goofy ongoing protest campaign targeting Paul Hastings, the placards keep showing up.

To recap, Paul Hastings partner Luc Despins is the Chapter 11 trustee for the estate of Guo Wengui (a/k/a Miles Guo, a/k/a Ho Wan Kwok) — a man who was a billionaire but now claims he has a negative net worth.

For some reason — that certainly couldn’t possibly be because they’re being paid by someone — a bunch of people all over the world are sufficiently wrapped up in this guy’s bankruptcy that they’ve been protesting Paul Hastings offices with cheesy Red Scare era photoshop jobs and posting attack ads on social media.

As protests go, it reminds me of the classic sitcom query: “shouldn’t you be wearing the bucket?” But despite seemingly generating nothing but more restraining orders, the protests continue.

The latest order sets limits on the time, place, and manner of the protests and enjoins the Debtor from “encouraging, inciting, suggesting, or directly or indirectly funding” any protest outside those restrictions. The First Amendment protects the right to protest — including outside people’s homes per a Supreme Court precedent designed to encourage harassing abortion providers (that the Court conveniently doesn’t appreciate having applied to itself) — but it doesn’t cover defamation and it definitely runs up against some guardrails as an excuse to intimidate parties to an ongoing litigation.

In December, the protesters set up camp near the Paul Hastings office in New York. An eagle-eyed Twitter user caught this sign outside the Tokyo office last week. And another tipster informed us that the protests have spiraled beyond the firm to ensnare Despins’s ex-wife:

They’re now protesting against him in peaceful Larchmont, outside the home of his ex-wife, saying his machinations purchased her multi-million dollar home. They’ve been here at least two mornings this week.

Which is why the latest order went out of its way to include “former spouses” on the list of protected people.

For his part, Guo Wengui asserts that no one can prove he’s behind the protests. It may seem implausible that people all over the world have come together in concerted action over a random bankruptcy in Connecticut… but that’s just what the evil Communists would have you believe!!!

Earlier: Looks Like The Court Order To Knock Off The Bizarre Bloody Vampire Images About Paul Hastings Didn’t Take

The Best Of Biglaw In Private Equity

You Can Pull Down A Lot Of Cash In One Summer

Using a Mortgage Broker vs. a Bank – the Legal Point