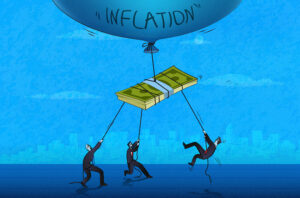 Fears about inflation have taken over in nearly every sector of life — from gas prices to food costs to the housing market. And now it’s a real concern for Biglaw.

That’s because, even though average billing rates for big firms went up in 2022, they’re not as generous a bump as in recent years. And the new rates are still below the inflation rate.  As reported by Law.com:

While high-dollar corporate work has cooled and overall demand is flat, standard billing rates have risen 5.8% in 2022, according to a six-month report this week from Wells Fargo Private Bank Legal Specialty Group. That may seem like a significant increase, but it’s less than the standard increases the group calculated for 2020 (5.9%) and 2021 (6.7%).

And that 5.8% is less than the increase firm’s had been planning on — 6-7% — according to Joe Mendola, senior director of sales for the Wells Fargo group.

He said if firm leaders could have a mulligan this year, they’d probably try to raise billing rates higher. He said some firms conceivably could have implemented midyear increases, but that with a demand increase of only 0.2% overall, there probably weren’t that many that tried.

As inflation is usually less than rate hikes, Mendola speculates the current high inflation will be a factor in setting next year’s rates. “If you go back the last decade, inflation has been below standard rate increases for the legal industry, so I think that’ll be a bigger factor for when firms are budgeting for 2023,” he said. “And it would be my expectation that at the end of August next year, standard rate increases will be above what they were this time around. Particularly if you’re looking at inflation around 8%.”

Bill Josten, strategic content manager for Thomson Reuters, calls the inflation rates a “huge” issue for the industry, and that trying to keep billing rates 1-2% over inflation is unlikely to happen:

Josten also note firms should start looking for other places to make adjustments to stay profitable:

Direct expenses for law firms increased 12.4% in the second quarter of this year, while overhead increased 13.5%, according to that same report. Some of that is a result of low baselines last year while the industry was still coming out of total remote work.

It seems inevitable that Biglaw will remain profitable — though maybe not in the throw-money-at-associates way we’ve gotten used to over the last few years.

Is There Any Outlet Too Stupid For Alan Dershowitz?

Where Good Ideas Come From

Where Good Ideas Come From

What Does a Property Lawyer Do?

How To Get A Google Review Removed