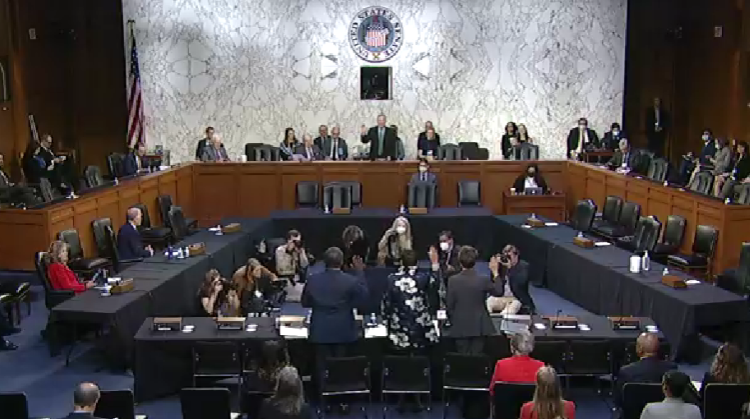 The ABA Standing Committee on the Federal Judiciary gave U.S. Supreme Court nominee Judge Ketanji Brown Jackson its “well qualified” rating after receiving consistent praise from those who knew her and reviewed her writing, committee representatives told the Senate Judiciary Committee on Thursday.

Judges and lawyers who spoke with the standing committee said Jackson showed no signs of bias toward criminal defendants, senators were told. The bias issue has been raised by some Republican senators who have criticized Jackson as being “soft on crime,” particularly in her sentencing of child pornography defendants.

Those who were interviewed, as well as experts who reviewed her writings, were consistent in their praise of Jackson’s integrity, professional competence and judicial temperament, the three characteristics considered by the ABA, the ABA evaluators told senators. The written explanation of the rating is here.

“Quite frankly, ‘well qualified’ was a rating we were compelled to reach after our exhaustive comprehensive peer review,” said retired U.S. Circuit Judge Ann Claire Williams, the standing committee’s chair. The committee sought information from 2,800 judges and lawyers, 250 of whom spoke with the ABA about their firsthand knowledge of Jackson.

“Everyone we talked to, interviewed or had substantive contact with uniformly gave the highest praise: ‘brilliant,’ ‘beyond reproach, ‘first rate,’ ‘patient,’ ‘insightful,’ ‘impeccable,’ ‘A-plus,’” Williams said. “The question we kept asking ourselves: How does one human being do so much, so extraordinarily well?”

Veta said the standing committee spoke to lawyers and judges throughout the country.

“What was remarkable was how consistent they were in their comments about how everyone gets a fair shake,” she said.

Freedom from bias is one characteristic that the standing committee considers when looking at a judicial nominee’s temperament. Among the prosecutors in the U.S. attorney’s office in Washington, D.C., who spoke with the committee, all rejected any claim that Jackson is “soft on crime.”

“I vehemently disagree” with the allegation, said one high-ranking prosecutor.

Another federal prosecutor who appeared before Jackson at least 10 times said there is no bias toward defendants. Such an allegation was “absolutely not borne out based on my experience with her,” the prosecutor said. Another prosecutor from the office said Jackson was regarded as “a good draw” because “she is a smart judge without any biases, which is all we’re asking for.”

The standing committee began its evaluation of Jackson Feb. 25, the date that President Joe Biden nominated her to the Supreme Court to fill the seat of retiring Justice Stephen Breyer.

In addition to speaking with judges and attorneys who had worked with Jackson, the standing committee heard from three reading groups who reviewed Jackson’s published opinions, briefs and law review articles. Two academic reading groups comprised professors and academics from the University of Illinois College of Law and Stanford Law School. A third practitioners reading group comprised nationally recognized lawyers, many with Supreme Court experience. 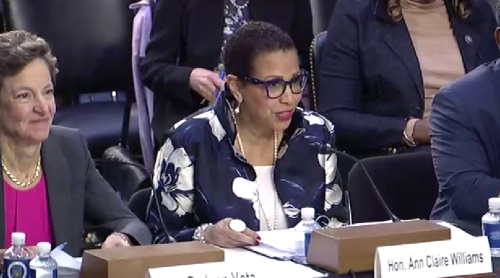 Jackson “has a sterling reputation for integrity,” according to the standing committee statement. “Judges and lawyers who have known her in every capacity uniformly praised her character, calling her integrity ‘beyond reproach,’ ‘first rate’ and ‘impeccable.’ She also uniformly received high marks for her industry and diligence. Lawyers and judges consistently described her as ‘thorough,’ ‘hardworking’ and ‘extremely well prepared.’”

• “You write the word ‘integrity,’ and then you put her initials next to it.”

• “She is off-the-charts in terms of her integrity and judicial temperament. She’s fair, honest, respectful, even-tempered, kind and understanding with everyone she interacts with.”

During her eight years as a federal district judge, only 10 of Jackson’s 578 opinions, dispositive orders or orders affecting injunctive relief were reversed on appeal. One reversal was again reversed by the Supreme Court. Four decisions were vacated and remanded, and three opinions were affirmed but criticized on appeal. No one interviewed thought that the reversals reflected negatively on Jackson.

• “She is one of the brightest legal minds in the country with a well-rounded set of experiences in the legal system and judiciary that will make her an exceptional Supreme Court justice.”

• “She’s absolutely brilliant as a jurist.”

• “Studying her opinions is like a master class in judicial writing. Her opinions are organized, methodical and reflect respect for the litigants. … She has spent most of her time as a judge on the district court but wrote opinions in her cases similar to what you would see from an appellate court.”

• “I cannot think of anyone more qualified or better suited to sit on the high court.”

“The praise for Judge Jackson’s judicial temperament was universal,” according to the standing committee statement.

• “Judge Jackson has the perfect temperament for a judge. She is unfailingly respectful, courteous and warm in every situation and to everyone, regardless of whether they are a litigant, colleague or courthouse employee. She is always prepared, and when she speaks, she has always considered every aspect of the topic, and her colleagues listen carefully and give great weight to her contributions to meetings and discussions.”

• She is “humble” and “with no sense of entitlement.”

• “Judge Jackson exhibited prototypical judicial temperament. She was engaged and curious, her questions were direct but respectful, she listened intently to the answers given by counsel, and she treated each argument and each party even-handedly and with dignity.”

The standing committee doesn’t consider philosophy, political affiliation or ideology in reaching its nonpartisan rating. In response to questions by Republican senators, the ABA representatives said the standing committee members are appointed by the ABA president, but there is no interaction with the ABA in the ratings process.

What Will The Post-Pandemic Wardrobe Look Like for Lawyers? (Part II) – My Shingle

7 Important Questions to Ask a Lemon Law Attorney in California

7 Important Questions to Ask a Lemon Law Attorney in California

Is The Law School Pandemic Boom Finally Over?