Jonathan Turley Called Out For Using Law For ‘Wrongful Ends.’ As If Selling Out For Publicity Is Wrongful! 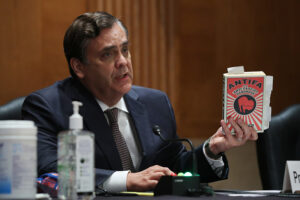 Jonathan Turley is a clown. But he’s an interesting clown to follow because of how shamelessly he uses the law as a vehicle to sate his desire for public attention. It’s not just tweaking his own conclusions when suits his favorite cable news audience, it’s also making up all new American history to defend the First Amendment rights of Canadian truckers (which was just as convoluted as that sounds).

Or jumping head first into tangential legal fights whenever he thinks he can gin up enough outrage. Like this weekend when he decided to go after Elie Mystal to bait Newsmax or its ilk to bring him on now that Elie is a bestselling author (affiliate link).

But at George Washington University Law’s graduation — which Turley skipped so he could do a speaking engagement because, again, ATTENTION! — the commencement address, delivered by Representative Susan Wild of Pennsylvania, highlighted Turley’s penchant for using his academic reputation to tell cable news audiences whatever they want to hear:

You must be wary of those seeking to use their influence and their expertise to wrongful ends. GW Law, for example, has a tenured professor who is without question well versed in constitutional law but has recently made a name for himself on cable news and social media by undermining his own past well documented scholarship. A law professor who at one time strenuously advocated that a president need not commit an indictable offense to be impeached and in just this past year argued the opposite for a president more to his liking. A president no less who instigated an insurrection and a bloody assault on our democratic process and the rule of law.

The only possible criticism of this speech is that GWU students are probably the audience who LEAST needs to hear this because they’re well aware.

Anyway, Turley responded through his blog and his response reads like the parody I would write of a Turley response. Except it’s real!

“She made no effort to reach out to me before the commencement and clearly made no effort to confirm the underlying allegation,” he writes, apparently unaware that we have video of him making both the before and after ends of this matter, obviating the need to clarify anything. As they say, the thing speaks for itself. Though that too might be a fungible legal concept for Turley.

He also bemoans that the congresswoman had every reason to suspect that he would have been in the room while she said this as though that’s a bad thing. If anything that actually makes her speech more legitimate since she wasn’t planning to talk behind his back. She had no way of knowing he was going to be out of town.

Personally I’m actually with Turley here to the extent that I don’t think his personal preference matters at all. The “outrage windsock” he consults in his own head tells him which side to back.

Now comes the semantics tap dance. Turley asserts that he was totally consistent in both impeachment hearings claiming that an indictable crime wasn’t necessary to sustain an impeachment.

This is true! And also where the consistency ends.

Because in the Clinton impeachment, while the House ultimately went forward with perjury allegations, he testified that, “If you decide that certain acts do not rise to impeachable offenses, you will expand the space for executive conduct,” and that the impeachment was justified because “he has deprived himself of the perceived legitimacy to govern.”

Of the Trump impeachment of charges of obstruction — also an indictable offense — Turley explains, “Nevertheless, I opposed impeachment on this record as incomplete and insufficient for submission to the Senate.”

Note that he wasn’t saying “I thought the House would lose on this record,” he was saying “the House shouldn’t be allowed to bring the case on this ‘insufficient’ record.” That’s a critical distinction. One might say the Senate trial is the place for hashing this out.

Regardless, the point is “criminal allegations and a vague lack of ‘perceived illegitimacy’” is enough for one while “an extensive record of an effort to obstruct Congress is too incomplete to even get a hearing before the Senate” in the other.

It is, of course, ironic that Rep. Wild would instruct our graduating class on being righteous lawyers by making a demonstrably false allegation against one of their professors. Her attack on use of the law for “wrongful ends” is clearly based on her disagreement with my views.

Well, kind of, yeah. “Wrongful” in this case is a statement of opinion so it is clearly based on her disagreement. But not necessarily a disagreement over the views, as much as disagreement with the sliding scale employed whenever Turley applies facts to rule. Because the criticism of Turley’s impeachment shimmying isn’t that he asserted a diametrically opposed rule in both cases, but that when the House sought a strict interpretation, he offered an elastic standard that he sold as “heads they win, tails you lose” in back-to-back impeachments.

Deploying academic goodwill to advance a legal standard that affords maximum flexibility for cynical actors in order to maintain a brand of aloof contrarianism to market to cable news bookers isn’t really a virtue.

And that seems to be Rep. Wild’s point.

The Sand Shortage, and Why It Matters

Whose Intersectionality Anyway? Kimberlé Crenshaw Clears Up Some CRT Confusions

Important Factors to Consider While Choosing a Coworking Space

What Risks Keep You Up At Night?