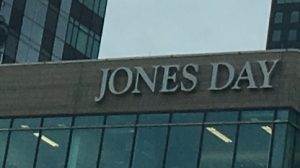 Since we’re all among friends, let’s just admit that nobody actually reads law reviews. With the exception of a tiny, tiny handful of pieces, the collected body of law review work exists solely to justify a one-line citation on a C.V.

A law review article is like posting party invitations on Friendster in 2022.[1]

Alas, the Streisand Effect is a law review’s best friend, and thanks to a Jones Day partner’s three-page letter to the author, a lot of people are about to check out W. Bradley Wendel’s “Lawyer Shaming” from the Illinois Law Review.

Professor Wendel of Cornell Law School, wrote the piece inspired by the efforts of the Lincoln Project to shame firms directly or indirectly involved in Trump’s challenges to the 2020 election, though the article as a whole delves into nagging questions of a lawyer’s professional responsibility when dealing in problematic representations:

The social value of legality is a weighty, but not conclusive justification for providing zealous representation to even the worst clients. However, these role-based considerations do not displace ordinary morality from the field altogether. Ordinary morality persists, and in some cases can produce justified self-evaluations, or ascriptions to others, of regret, guilt, or shame. Building these “moral remainders” into professional ethics can help resist cynicism, amoralism, and alienation of professionals from the resources of morality.

Despite being a timely and important topic, this article likely wasn’t getting much attention, but it caught the eye of Kevyn Orr at Jones Day! And he decided to send Professor Wendel a THREE-PAGE letter about it! In the letter (posted in part in a Twitter thread from David Enrich of the New York Times — more on his role in all this in a minute), Orr says he’s writing to “request that certain inaccuracies regarding Jones Day be corrected before the piece is further disseminated.”

As a veteran of Jones Day complaining about “inaccuracies,” trust me that we’re about to deplete the strategic air quote reserve discussing this.

Your article identifies Jones Day as among “the elite firms” that were “retained by the Trump campaign” to file post-election “challenges to the results of the election,” and states that the Lincoln Project’s attacks on the firm were an effort to “shame” it for its involvement in such challenges.

This is incorrect: Jones Day did not represent the Trump Campaign or any other client in any litigation challenging the results of the 2020 presidential election.

It is inaccurate to say that Jones Day was “retained by the Trump campaign” post-election. That’s why Professor Wendel DOESN’T SAY THAT. The article begins “In the weeks following the 2020 presidential election, lawyers retained by the Trump campaign, and some acting on their own, filed a farrago of challenges to state election procedures” and identifies Rudy Giuliani and Sidney Powell among others.

The phrase “elite firms” doesn’t show up until later in the article, when Wendel writes “Even before the conspiratorial, Giuliani and Powell-orchestrated lawsuits, challenges to the results of the election drew intense public criticism of the lawyers representing the Trump campaign.” And even at this point, the article hasn’t said anything about Jones Day.

It is also inaccurate to suggest that Jones Day worked for the Trump campaign post-election to file “challenges to the results of the election.” But that’s also not really what Wendel’s article says. Wendel, in describing the shaming pressure leveled at law firms cites social media from the Lincoln Project calling out Jones Day for its “unwarranted and dangerous attacks on our democracy” that claimed the firm was “representing Donald Trump[].”

The latter is untrue… but it also isn’t quite that simple.

Above the Law covered Jones Day’s clumsy spin over this point before. When this shaming first started, Jones Day categorically denied that it represented Trump “in any litigation alleging voter fraud.” True.

But then the statement began furiously downplaying that Jones Day, in fact, represented the Pennsylvania GOP committee in litigation aimed at DISENFRANCHISING Pennsylvania voters. See, they didn’t “allege voter fraud” they simply argued that the courts should throw out the winning ballots as illegal from the start!

Oh, Distinction? You forgot your difference.

Orr can quibble that throwing out mail-in ballots from overwhelmingly urban areas still subject at the time to COVID restrictions doesn’t count an “attack on democracy,” but (a) it totally does, and (b) doesn’t make Wendel’s article inaccurate for noting that people criticized Jones Day for this.

The Lincoln Project attacks referenced in your article were prompted by a New York Times article, co-authored by David Enrich, that falsely asserted that Jones Day was involved in such challenges.

Nope, that’s not what the New York Times article said. Rather, the article identified Jones Day as the most prominent among firms representing “Trump and the Republican Party” in challenging the results of the election. That would, by its text, include representing the Pennsylvania GOP trying to toss legitimate ballots in Philadelphia in an effort to subvert the will of the voters.

Why drag all of this out into the open over a law review article that no one was going to read? We can’t answer that for Jones Day, but we can say that this behavior isn’t unusual for either Jones Day or Orr.

A similar firm hissy fit erupted back when Orr served as emergency manager of Detroit (a role explicitly rejected by the voters of Michigan, but then re-imposed upon the state by the Republican state leadership — in case this informs your sense of the Jones Day commitment to democracy). As emergency manager, Orr functionally replaced the elected government of Detroit and began addressing its financial woes through a series of big payouts to corporate banks. When a relatively tiny parody site launched mocking the effort, Jones Day swooped in with a cease and desist letter over the use of its name in an absolutely obvious case of fair use.

In that case, the gravity of a major firm got the website to cave — the New York Times seems less likely to bend.

Toward the end of the letter, Orr shifts to discuss an event planned for the next day at Cardozo Law School, where Professor Wendel was set to interview David Enrich about his new book Servants of the Damned (affiliate link).

Given Mr. Enrich’s rejection of the facts provided to him during his fact-checking and his own personal moral accountability for the baseless “shaming” events mentioned in your article, we find it surprising that he would be invited to speak at an event having anything to do with ethics, much less legal ethics.

As Enrich notes on Twitter, this isn’t actually true either. But the most interesting part of this passage is the shift from the first person to the third person. The letter started off almost as if Orr had some personal observations and then shifted to what seems to be a statement of the firm.

“We find it surprising…” could there be a more passive aggressive phrasing?

We ask that, if you intend to use the Lincoln Project’s election-related “shaming” tactics as an example in either your manuscript or your upcoming book, you make clear that it was prompted by admittedly false media reports about the nature of Jones Day’s involvement in pre-election litigation that did not in fact challenge the results of the election. Thank you.

But you did! Jones Day didn’t file one of the wingnut suits alleging that the results were a lie — sure — but it actively pursued litigation aimed at CHANGING THE RESULT OF THE ELECTION.

Jones Day’s activity didn’t involve phony affidavits or allegations about Italian space lasers or whatever. Nor does anyone suggest the firm would ever sully itself with that kind of work. But it was engaged by Republicans in lawsuits intended to change the results as tabulated. Jones Day may not like being looped in with kooks like Rudy and Powell because its lawsuit attacking ballot rules was more “professional” in tone.

But even Best in Show gets fleas when lying down with the other dogs.

Earlier: Yesterday Was The Day America Learned What We’ve Known About Jones Day All Along
Biglaw Firm Throws Even Bigger Hissy Fit

[1] Friendster stopped being a social media site in 2011. But, admit it, you thought for a second about whether or not zombie profiles might still be out there.

What Types of Services Do Trademark Lawyers Provide?

Mean Girls Or Liable Girls: Was The Burn Book Defamatory?