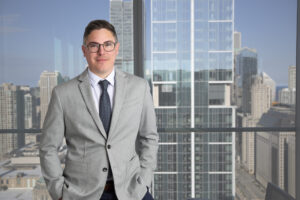 As far as the legal field goes, Joshua Shirley has a relatively non-traditional background. Being brought up on a hobby farm in a blue-collar family, Josh spent most of his childhood outside in the St. Louis sunshine. From bailing hay and landscaping to law school and litigation, Josh is a first-generation lawyer who turned the hard work of farm living and critical thinking of litigation into legal recruitment success. Today, he is a Managing Director at Kinney Recruiting where he matches attorneys to opportunities in Chicago, Denver, and other major markets throughout the nation. His secret to legal recruiting success, however, started on his family’s farm.

The thing that sets Josh apart from other legal recruiters is his personable style, patience and will to persevere – something he saw the benefit of when his dad introduced rotational grazing for their cattle. “We divided our land into paddocks, planted the very best grass in each one and rotated the cattle every few weeks. That allowed the other paddocks to rest and recover and keep our steers’ bellies full. Watching my dad have the patience and care for our cattle while looking out for the longevity of our land taught me a lot about having a long view in life and really caring for what you have. You never know when someone will show back up on your doorstep or when a random encounter will lead to your next career move. A lot of my success is because people I’ve helped in the past, either by helping them lateral or just by giving them advice, show back up looking for something new. Whether it’s land or a lateral move, the goal is to get whatever you have to the best place possible.”

Growing up, Josh was always outside. When he wasn’t bailing hay, landscaping, or mowing lawns, he was playing sports, skiing, and fishing. While he loved spending time outdoors and developed a great interest in biology, Josh didn’t necessarily want to pursue it as a career. When it came to choosing his degree, he chose English Language and Literature and minored in Environmental Science. That helped him land an internship at the U.S. Army Corps of Engineers in his junior year. Josh was the perfect fit for the unique and highly sought-after position, where he helped researchers and biologists in the Conservation Department while simultaneously spending time running boats up and down the Mississippi River. It also ended up putting him on a path he didn’t see coming. “After I had graduated from Southern Illinois University in Edwardsville, I got to a point where I was either going to go back and get a Master’s in Biology or try something completely different. I spent a summer shadowing the General Counsel of the Army Corps of Engineers and those four or five weeks changed my life. Shadowing her piqued my interest in law and l think she picked up on it. She encouraged me to apply to law school and before I knew it, I was in.” Josh was accepted and attended Vermont Law and Graduate School – the country’s best and most well-known environmental law school. After he had completed his first year, he transferred back home to be closer to family and got his J.D. from Southern Illinois University School of Law. “I didn’t know it at the time, but law combined a lot of my favorite things. The legal playing field is constantly shifting and you have to find creative ways to stay upright and steady at all times.”

Before entering the world of legal recruitment, Josh worked as an attorney, advising private energy companies in litigation and transactions. Josh particularly enjoyed his litigation practice and the opportunity to argue at trial and in dispositive motions on behalf of his clients. “Court is exhilarating. It’s so fast and your argument is put out there and exposed. You’ve got opposing counsel taking shots at it, the judge is asking questions and your argument is getting chiseled away until it’s at its final form where you either know your points of law or don’t.” Oddly enough, six months before he decided he wanted to pursue something new, a legal recruiter reached out to him regarding another litigation role. “I don’t want to say I had a bad interaction, but it was certainly eye-opening. Being in the industry now, I understand more about it, but at the time I got the feeling that I was just another resume – a tiny blip on that person’s radar. I ended up getting ghosted! I didn’t go into recruiting thinking all recruiters are like that. In fact, that experience made me think “Huh, I really like helping people. What if I tried recruiting?”

Josh was suddenly caught between starting his own practice, which is what he had initially planned, and entering legal recruiting. “Even though I was a junior attorney, I had substantial litigation and court experience and was fortunate enough to have a considerable client base. The thing is… I had a really good feeling about recruiting. I decided I was just going to take a long shot. I got a LinkedIn message one day from a recruiting firm asking if I had any interest in legal recruiting and it was a now-or-never moment. I took a couple calls and the next thing you know, I was moving to Chicago to join a recruiting firm and the rest is history.” In 2017, Josh joined a large company with nearly 100 fiercely competitive agents where he quickly became a top-performing legal recruiter. “Towards the end of my last firm job, the stress level was incredibly high and I had thought that legal recruiting would be a low pressure job — something I really needed at the time. I was wrong and I’m glad I didn’t know that because let me tell you: this industry is just as crazy. Starting recruiting felt like being dropped into a snake pit at first. I’m a very competitive person which is why I loved being in court, enjoy playing sports and why my brother and I can’t play ping-pong, but entering that kind of recruiting environment was very challenging. Being competitive helped because I saw other people succeeding so I willed myself into being good at it. After some early placements, I found I had a knack.”

Josh’s secret weapon was something he had picked up from his father. “My dad could talk to a fence post and have a good conversation. Growing up, I’d go with my dad to Walmart and he’d randomly start talking to somebody and I’d worry we might be here for two days talking about some hardware tool. I’d say ‘Dad, do you know this person?’ and he’d always respond with ‘Never met ’em,’ when I had important video games to get back to! I guess I got that from my dad.” Part of what makes Josh such a talented recruiter is his unparalleled ability to connect with just about anybody. “I like meeting new people and really getting to know them. I made some lateral moves early on in my career that turned into long-lasting connections and I made great friends out of some of those candidates. Four years on and we still go catch a baseball game or grab a drink.”

In 2020, Josh started looking for something bigger. “I don’t know if Robert even knows this but when I started looking for a new recruiting firm, I didn’t even apply to or look at any other recruiting firms. Kinney was the only one. I flew in to meet Robert and when I met the team, I immediately knew that they are a good bunch. Robert, Danny, and Jack were so positive and friendly and when they shared some deals they had worked on, I was all in. The stuff Robert works on is what most recruiters aspire to get to at some point in their career. I remember thinking, ‘Whatever these guys are doing and whatever they have to teach me, I really need to join and learn.’ I had done some significant deals prior to Kinney but this was the type of recruiting practice that I wanted to be a part of – a group of good and upstanding recruiters, working on some of the best and biggest placements in the nation, so I joined Kinney in May 2020. It was just one of those things – when you know, you know.”

Josh’s combination of patience, which he picked up on the farm, and the grit he developed in litigation is part of what puts Kinney Recruiting in a league of its own. “The brunt of being an honorable and good recruiter is approaching this job with the mindset that you’re here to help people. That’s what we’re about. It’s about being honest and sharing what you know with whoever is open to hearing it. Having an intelligent drive to get to the decision makers and the people leading these groups is so important. Anyone can regurgitate a job description but finding out what sort of deals they’re working on, what industries they’re working in, what kind of background knowledge would be helpful to the practice is invaluable. Those are the details that help you fit the right person at the right firm and help get people closer to their end goal. Our practice in Chicago has cultivated so many good relationships with partners where I get to talk directly to them. The goal is not to just be pushing uphill but pushing uphill in the most effective manner. The other thing is having a lot of grit. At first, candidates are often not incredibly receptive to advice but if you’re patient and can prove that your advice works, you’ve got a connection for life.”

Just shy of six years in the industry, Josh is only going up. “There’s a lot to learn in recruiting and there’s a lot about the legal industry that you’re only able to learn in this field. My advice to candidates is to appreciate, internalize and take advice that’s worked for other candidates. I really wish they would have taught us some of this stuff at law school but until they do, we’re here to help you and I’m always up for a call (and baseball game)!”

Declined for a Contract Performance Bond? What It Takes to Get Approved Via the SBA

Declined for a Contract Performance Bond? What It Takes to Get Approved Via the SBA

Relativity Brings Legal Technology To The Struggle For Justice