Judges Usually Like To Reach A Middle Ground With Litigants 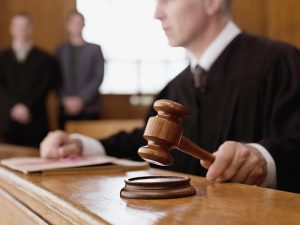 As many people within the legal profession know from firsthand experience, it is very difficult to be a judge. Usually, when a jurist makes a ruling, there will be one party who is happy about the decision and one party who is not, and judges get a fair amount of grief from lawyers. However, whenever it is possible, judges like to “split the baby” with litigants and give each party something in their rulings. If litigants recognize this, they can usually secure much better outcomes for clients.

One time, I was on the receiving end of a motion to compel an additional deposition of my client. I was pretty sure that my adversary would win the motion, even though I did not think that my adversary had proved the standard he needed to satisfy in order to compel my client to produce an additional witness to be deposed. Most courts favor discovery, so if litigants ask for additional documents or depositions from a party, it is likely that they will get them.

Knowing that I was probably going to not succeed on my motion, I made a request in my opposition that if the judge was obliged to require my client to produce additional discovery, that it come in the form of answers to interrogatories. Judges of course have the power to regulate the nature and methods of disclosure. I thought to myself that interrogatories would be way easier for my client to answer than to produce my client to appear for a deposition. I had difficulty convincing the client to appear at the first deposition, and I did not want a repeat of that experience. Moreover, I knew that I had a lot of power over the responses to interrogatories and that I could shape what was said in the responses.

After pretty contentious oral arguments, the judge eventually decided to order additional discovery. When it came to the manner of the discovery, the judge agreed that written answers to interrogatories should be ordered rather than an additional deposition. Of course, my adversary was bummed since he would not get the benefit of asking questions of my client in the moment, which usually yields better answers. I was able to shape the answers to interrogatories and they turned out to be pretty favorable to my client’s case. I believe I even attached the sworn responses to interrogatories when moving for summary judgment later in the case. By suggesting to the court that a middle ground was appropriate, I was able to achieve a better result for the client.

It is also almost assured that if a party requests a certain number of days to respond to something, and their adversary requests a different number, a court will usually meet the two parties in the middle. I learned this the hard way earlier in my career. One time, I requested more time so that I could complete certain steps before discovery in the case would be complete. The court asked me how long I thought I needed to complete the tasks, and I answered with a pretty modest period of time. I thought if I got my ducks in a row, and everything went perfectly, I would be able to complete the tasks by this deadline.

However, my adversary said that an even shorter amount of time was adequate, even though I did not feel that it was. The court predictably picked a time between the two. This made it extremely difficult to get everything that I needed to get done by the deadline set by the court. Moving forward, I resolved that I would keep in mind that a judge would likely “split the baby” when making decisions upon which parties disagreed. Accordingly, I made sure to give myself a little buffer time when requesting deadlines by the court, knowing that a court would likely not grant the deadline by one party if it is opposed by another, and would likely try to find a middle ground between the positions of the parties if possible.

All told, judges have extremely difficult jobs, and it is hard to please all of the stakeholders in a matter during an adversarial process. If lawyers recognize that judges like to find a middle ground if possible, attorneys can focus their strategies and have better outcomes for clients.

How Your Firm Can Navigate The Latest Appellate Trends

Biden describes 4 potential SCOTUS nominees; US liable for over $230M in church shooting