‘I am the dream and the hope of the slave’: Ketanji Brown Jackson sees promise in historic confirmation 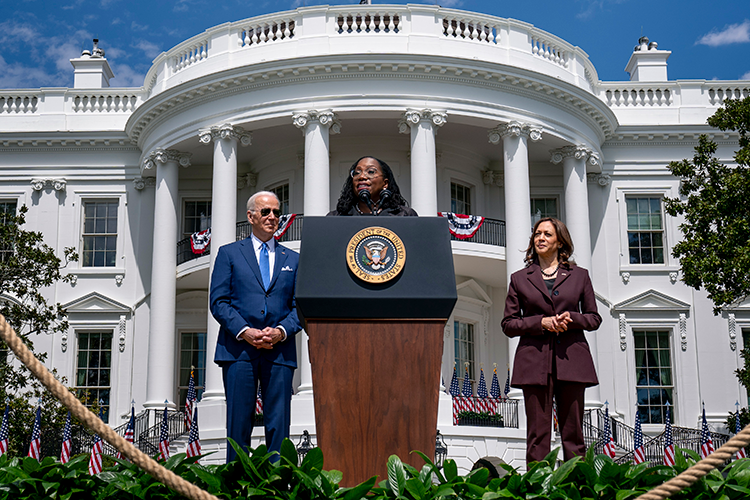 Speaking with emotion during a White House event, Judge Ketanji Brown Jackson credited pathbreaking leaders and generations of persevering Americans for her historic confirmation to the U.S. Supreme Court.

Helping light the way were Martin Luther King Jr., Justice Thurgood Marshall and Judge Constance Baker Motley, Jackson said during the celebratory event on Friday. “The path was cleared for me so that I might rise to this occasion,” Jackson said.

Jackson said she is standing on the shoulders of generations of Americans who never had the kind of opportunity available to her, but who still believed in the promise of America.

Jackson’s grandparents on both sides had no more than a grade school education. Her parents went to racially segregated schools growing up. She has achieved far more than what her grandparents ever could have imagined, Jackson said.

“I am the dream and the hope of the slave,” Jackson said, borrowing from poet Maya Angelou.

Jackson began her speech by thanking the many people who have helped her along the way. Throughout her remarks, she dabbed her eyes and her nose with a tissue.

Jackson said she has been flooded with cards and notes from people expressing how much this moment means to them. The notes from children were particularly cute and especially meaningful, she said. “They speak directly to the hope and promise of America.”

It has taken 232 years and 115 prior appointments for a Black woman to be selected to serve on the U.S. Supreme Court, Jackson said. “But we’ve made it,” she said to applause. “We’ve made it. All of us.”

This Week in Rideshare: ‘Super App’, Studies, and Scooters

This Week in Rideshare: ‘Super App’, Studies, and Scooters


Warning: unlink(/tmp/jnewsfirstload-r6EYuU.tmp): No such file or directory in /home/customer/www/dailylegalbriefing.com/public_html/wp-admin/includes/class-wp-filesystem-ftpext.php on line 142