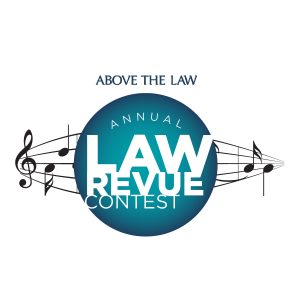 Ladies and gentlemen, it’s time to feast your eyes upon the best of the best in the 2022 law revue video contest. This year, the competition was superb — and for the thirteenth edition of this contest, we decided to narrow down the competition to the top five videos.

Not only were these law students able to carry a tune (for the most part), but they also had excellent comedic timing, and provided us with professional-grade production values. Our finalists’ videos were an absolute joy with some recent and late 90s/early aughts pop earworms, providing an excellent soundtrack for this year’s law revue stylings.

This year, your reviewers will be Staci Zaretsky, Joe Patrice, Kathryn Rubino, and Chris Williams. We issue only advisory opinions; you hold all the power.

Who will follow the winners of years past into the annals of Law Revue history? It’s up to you, our readers! Do the right thing: vote early, and vote for the best.

Videos are listed in alphabetical order by school. Voting will close on SUNDAY, MAY 8, at 11:59 P.M. (Eastern time).

STACI: Everyone else thought this was a little too cutesy, but I really enjoyed it. Plus, the singing is top notch. Great job!
JOE: This is so earnest. Despite a couple of good lines, the video doesn’t really seem like “Law Revue.” It feels like the retrospective from the final episode of a long-running sitcom about law students — like a commercial for going to Catholic…
KATHRYN: … or The Pint! Seriously makes me nostalgic over the pre-panini ease of being a bar regular. If these entries are supposed to make you feel something, well, this one hits.
CHRIS: An earnest effort. 5/10

NYU LAW — COLD CALL ME BY YOUR NAME

STACI: The lyrics made me chuckle. Nice effort with this one, NYU. But if you’re anything like me, you’re going to *love* the law school’s second effort here. (Yes, it was so good that we included it as a finalist as well. Rare achievement unlocked!)
JOE: As Staci eludes, this one suffers from the strength of the Violets’ second effort. Still, after years of watching these videos, the chorus is ALWAYS the hardest part. No one ever notices the repetition in the original, but in the parody it can get grating — this video does a potentially underappreciated job of making the chorus feel unobtrusive. Also points for the rash line.
KATHRYN: Taking a shot at gunners is like the low-hanging fruit of Law Revue… but that’s only because they give so much fodder. Everyone can appreciate taking these folks down a peg or seven.
CHRIS: Cheesier than the cave of the stuff kept underground in Springfield, Missouri, because the US continues to subsidize dairy farmers to avoid Great Depression 2. Super impressed by the range of content they accomplished within a 3-minute window (according to the clock in the back of the room). Well done, 8/10.

STACI: NYU is appealing to my inner eighth grader here because I still love the Backstreet Boys. Fantastic lyrics, and even better singing. Super-duper great job!
JOE: I’m not one to say comedy should be all things to all people, but this entry manages to walk an impressive line. FedSoc bros can laugh at the excesses of “woke” guys and the reality-based law students can laugh at cringey faux feminists talking about being “sons of mothers.” I’m still laughing at the random appearance of what’s almost certainly the MacDougal Street Pommes Frites at the end.
KATHRYN: So, sure, everyone admits this entry is the prohibitive favorite, but frontrunners can stumble. And it’s not as law school-specific as some of the other entries — often times playing to the specific foibles of that experience (as opposed to higher ed, generally) will carry the day.
CHRIS: Model answer. The tampons were an intentional infliction of hilarity. 10/10. I had some hesitation about how to deal with double entries, but after a performance like this I won’t be the one holding them in double jeopardy.

STACI: Doing a live performance can be extremely difficult. It’s sometimes easy to get off pitch if you can’t hear yourself. This one gets a participation trophy from me, but that’s it.
JOE: I will never understand how we didn’t end up with multiple “We Don’t Talk About CivPro” entries. The low-hanging fruit is right there. Remember earlier when I said choruses can be rough? This is what I mean. When you’re going for clever parody a great chorus line is only funny… once. When it keeps coming at you over and over it starts to drag. I can’t help but feel that this would have worked a lot better with a proper music video to allow the visuals to compensate for the repetition.
KATHRYN: A for effort and all that. But, it’s just not a successful as it could be. Perhaps something that plays more naturally off the ACS/FedSoc rivalry — Jets and Sharks style — would hit harder.
CHRIS: Self-indulgent flagellation — outlining would have been a better use of time. For me. As the viewer. I am no longer in law school. –/10.

STACI: Yeehaw, Texas! The proper citation made this former law review editor smile, as did the ATL shout-out in the song. I absolutely loved this. Great work!
JOE: The only entry to play the Above the Law reference game and they killed it. The dancing is fantastic BECAUSE it’s not quite perfect — good enough to not be distracting, but human enough to keep you grounded in the parody. A BTS spoof needed that dash of authenticity.
KATHRYN: Told you, no one likes a gunner. This is my dark horse to win the competition. Uniquely law school content, quality production value, ATL reference — this one has it all.
CHRIS: Decent, campy in a good way. 6/10

It’s time to vote, everyone. Polls close on SUNDAY, MAY 8, at 11:59 P.M. (Eastern time). Get out the vote among your friends and family. Congrats!

Biglaw Business Is Booming. Obviously, It's Time To Talk About Layoffs.

The Summer Of Their Discontent