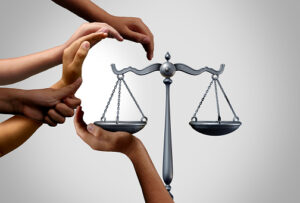 When I first wrote about University of Illinois Chicago School of Law professor Jason Kilborn I said, “Law School N-Word Controversy Is More Complicated Than It Appears At First Glance,” and I had no idea how prescient those words would be. In January, we learned that Kilborn’s Civil Procedure II exam in December 2020 contained a question that referenced profane expressions for African Americans and women in their abbreviated form, as such: “n____” and “b____.” And I noted that using euphemisms for hurtful slurs was, at least, a step in the right direction. But it turns out there is so much more to the story.

As reported by the ABA Journal, a letter from UIC’s Office for Access and Equity (OAE) details other conduct by Professor Kilborn — some that predates the exam question — including a January 2020 class where he:

The OAE letter goes on to say in that class Professor Kilborn “us[ed an] African-American Vernacular English (“AAVE”) accent when referencing a Black artist’s lyrics; and when confronted by a Black student during the class because the student viewed these comments as overgeneralizing references to minorities, he referenced his own ‘implicit bias’ as some form of justification.” So it was against this backdrop that students read the exam question.

OAE also found that Kilborn’s problematic behavior continued in the aftermath of the exam:

when he learned that student groups had lodged written objections tot he exam question in late December 2020, Professor Kilborn responded in early January expressing anger and displeasure with students’ objections in a manner that created retaliation concerns for Black students with a January 4, 2021 email that verbally chastised a student for signing the BLSA Letter that he referred to as a “horrible, horrible letter,” an “attack letter,” that was “vicious” and “cruel,” and that led Professor Kilborn to feel and to write that his “hand of help had been bitten off,”
….
likewise, in comments during a January 7, 2021 Zoom meeting to another student was had signed the BLSA Letter, Professor Kilborn referred to students expressing dissent as “enemies,” twice stated that the student in that meeting was accusing Professor Kilborn of being a “liar,” articulated his desire to go after people who “come at me,” and discussed the concept that Professor Kilborn might become “homicidal” because of the BLSA Letter

Kilborn denies the bite the hand that feeds her comment, and said the “homicidal” comment was made in jest. He also apologized for any distress the exam question may have caused as well as using “lynching” as part of the classroom discussion. However, OAE found the cumulative impact of the incidents was detrimental to non-White students:

OAE notes that Professor Kilborn candidly expressed regret for any distress the exam question may have caused students and, as verified by a recording go the January 23, 2020 class session, apologized for using the word “lynching” in class. Our review substantiated that his conduct, however, when considered in cumulative fashion, affected many Black students and substantially interfered with their participation in the University’s academic program. Many students found the racially-charged January 23, 2020 classroom session offensive, were also distraught by what was viewed as a racially insensitive exam question in December of 2020, and were then fearful of arguably retaliatory and threatening language in January 2021. This amplified the racial tensions from Professor Kilborn’s prior conduct. Even hinting at physical violence in jest toward a student in reaction to written or spoken criticism is completely unacceptable; referencing the potential to become “homicidal” in response to communications criticizing Professor Kilborn’s conduct on racial topics created race-related fear of physical safety or retaliation. Such fear was amplified by the timing of these developments in December 2020 and January 2021, when racial tensions in broader American society were uniquely prevalent. Significantly, Professor Kilborn made the “homicidal” comment on January 7, only one day after violence at the United States Capitol Building, at a time when concerns over public safety were heightened nationwide.

The school concluded that, by a preponderance of evidence, Kilborn’s conduct was harassing on the basis of race:

For these reasons, OAE has substantiated that conduct addressed herein (i) was perceived as offensive toward non-White people, (ii) was objectively offensive (particularly because of Professor Kilborn’s overtly intimidating and threatening reactions to student-voiced criticism of his racially-charged comments and exam question), (iii) took an emotional toll on non-White students, faculty, and and supporters of the non-White students who felt threatened, and (iv) interfered with non-White students’ learning experiences at UIC JMLS. By a preponderance of the evidence, OAE has therefore substantial conduct on Professor Kilborn’s part that was harassing based on race and constitutes a violation of the policy.

OAE further noted that the analysis did not “hinge” on whether there was a pedological justification for using a truncated version of slurs on the final exam.

It is against this backdrop that Kilborn told the ABA Journal that he intends to file a federal lawsuit against the university. Kilborn is receiving legal help from the Foundation for Individual Rights in Education, and they previously said in a press release that Kilborn had been “abruptly suspended” by the university. The university counters he was placed on paid administrative leave:

Kilborn also says he was denied a merit raise of 2 percent when he refused  cultural competency training and coaching.

“First of all, it’s a ridiculous waste of time. Study after study shows these don’t do anything except aggravate the person forced into it,” he says. “And I don’t need sensitivity training. I am totally sensitive.”

Kilborn also claims the university defamed him and subjected him to emotional distress. He describes the investigation as a “travesty of egregious violations,” calling the policy opaque and claiming he had no opportunity to confront allegations, witnesses or evidence.

The entire episode serves as a reminder that allegations of racial bias can be a lot more complicated than they appear at first blush.

What are the Biggest Risk Factors for Workers to Be Victims of Sexual Harassment in Burlington?