Laying Down The Law In Blockchain Games 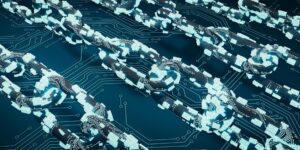 The video game industry is a massive, ever-growing, global phenomenon. In 2021, it was worth an estimated $180.3 billion, a figure that is projected to grow to $300 billion by 2025. While the industry has seen steady growth for years, a new development in the past few months is set to shake things up even more: blockchain games.

What are blockchain games? Simply put, they are video games that use blockchain technology as a foundation. But what does that mean, exactly? And why are people so excited about them? Let’s take a closer look.

Blockchain technology is the backbone of cryptocurrencies such as Bitcoin and Ethereum. It’s an open-source distributed database that allows for secure peer-to-peer transactions without a third party such as a bank or financial institution. This makes it perfect for video gaming, as trust and security are crucial elements for successful online gaming.

Gambling laws are perhaps the most important to be aware of with this form of gaming. Many blockchain games have in-game currencies — used to purchase items, unlock features, or represent a share in the game’s economy — that can be bought, sold, or traded for real-world money. As such, there’s a risk that these games could be used for illegal gambling activity.

In the United States, for example, gambling is regulated at the state level, so each state has its laws governing what is and isn’t considered gambling. Some states have very strict laws, while others are more lenient. As such, it’s important to be aware of the gambling laws in your state or country before playing any blockchain games.

Blockchain games could also potentially run into trouble because many of them have features resembling security exchanges. As their currencies, many of these games use tokens that can be bought and sold on token marketplaces. These tokens may sometimes be traded on cryptocurrency exchanges or used to raise funds through initial coin offerings (ICOs). These token marketplaces could be considered security exchanges, meaning they must be registered with the Security and Exchange Commission (SEC).

In the United States, the SEC regulates all securities trading, which includes anything that can be traded for money, such as stocks, bonds, and cryptocurrencies. Though companies could be required to disclose certain information to investors and impose restrictions on who can purchase the tokens, as of now, the SEC has not taken any action against these marketplaces, as the legal classification of these tokens is still a matter of debate in many jurisdictions.

Like any other video game, blockchain games are subject to copyright and intellectual property laws. These laws protect the game developers’ creative works, including the game’s code, art, and music.

These laws are essential because they give game developers a way to stop others from copying or stealing their work; they can also be used to prevent players from altering (“modding”) the game in ways that the developers disapprove of.

Blockchain games are a relatively new phenomenon, and, as such, they are still subject to many of the same laws as other video games. However, because they use blockchain technology, a few additional laws could potentially apply to them. Since the exact law is currently ambiguous, it’s essential to know the laws that apply to video games and how blockchain technology can impact them.

Suppose you’re interested in learning more about the legal implications of blockchain games. In that case, I recommend listening to the podcast episode “Season 2, Episode 9: How to Make Money Playing Games on a Blockchain (featuring Neeraj Kashyap).”

Olga V. Mack is the VP at LexisNexis and CEO of Parley Pro, a next-generation contract management company that has pioneered online negotiation technology. Olga embraces legal innovation and had dedicated her career to improving and shaping the future of law. She is convinced that the legal profession will emerge even stronger, more resilient, and more inclusive than before by embracing technology. Olga is also an award-winning general counsel, operations professional, startup advisor, public speaker, adjunct professor, and entrepreneur. She founded the Women Serve on Boards movement that advocates for women to participate on corporate boards of Fortune 500 companies. She authored Get on Board: Earning Your Ticket to a Corporate Board Seat, Fundamentals of Smart Contract Security, and  Blockchain Value: Transforming Business Models, Society, and Communities. She is working on Visual IQ for Lawyers, her next book (ABA 2023). You can follow Olga on Twitter @olgavmack.

Lawyers – Our Only Hope In The Metaverse!

Lawyers - Our Only Hope In The Metaverse!

With Corporate Work In Limbo, Associates Encouraged To Focus On Training Instead Of Billables