Leaving The Partnership To Focus On Your Superpower 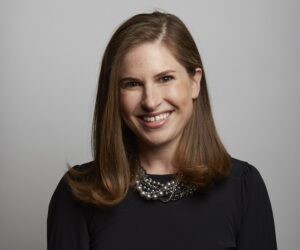 Imagine you’re a law firm partner. You’ve got amazing colleagues, a solid work-life balance, and make great money. But you’ve always felt like something was missing. Because while practicing law is fine, it doesn’t feel like that’s what you were meant to do.

At the same time, you know you’ve got a pretty good deal. I mean, you’re a freaking law firm partner. So you ignore those thoughts about possibly doing something else. Right?

Well, not if you’re Karen Vladeck.

Today, Karen is a managing director at Whistler Partners, a legal recruiting firm. To the surprise of exactly no one, she’s been absolutely crushing it ever since she left her law firm partnership. That’s because Karen has tapped into her unique superpower — the thing she’s always felt that she was meant to do.

“I’ve always been a connector,” she said. “Always had lots of friends, and built lots of relationships. And while I loved being a partner, it just wasn’t the highest and best use of my skills. I wanted to focus on the business side of the law 100% of the time.”

Karen’s knack with people is obvious to everyone who’s ever known her. For years, she would help lots of people land jobs at great firms, just through her network. Friends suggested that she consider a career in recruiting. “You should be paid for this,” they said. “Just think about how many people you’ve already placed!”

Recruiting did seem like a great fit. She’d be able to focus on what she enjoyed most — connecting with people, which she has always stressed should not feel like an awkward, forced occurrence. “I don’t really consider ‘networking’ to be part of business development and maybe that’s why I have never shied away from it,” Karen explained. “I consider ‘networking’ being out in the world and making friends.”

At some point, Karen realized that she was more interested in the business of building relationships between and among lawyers and clients than she was in the actual practice of law itself, which is when she decided to make the jump.

I asked Karen what it was like to walk away from the partnership. I remembered what it was like for me to leave the practice of law years ago. But I mean, the circumstances were different. I wasn’t a partner who was doing well. I wondered what pivoting felt like for someone who was thriving at her law job.

“Ever since I was in college, I wanted to be a lawyer,” Karen said. “Was I really going to take a job that anyone could do without a law degree? So much of my identity since I was 22 had been tied up in being a lawyer. Losing that part of my identity felt extremely scary.”

That’s the toughest part about doing something different. Because for many of us, the upside of finding something better always seems to be outweighed by the risk of walking away from something that’s so wrapped up in our identity. It feels like we’re giving up part of who we are. But at the same time, taking that risk could lead to something even better.

For Karen, the biggest change is that she gets to focus 100% on building relationships. She can spend all her time on what she loves doing the most. Plus, one unexpected benefit is that now that she’s no longer a law firm partner, she has even more freedom to post whatever she wants on social media.

That’s partly because her new boss — Sean Burke, the outspoken founder of Whistler Partners who once bragged on LinkedIn about beating me in a game of one-on-one — is a fervent believer in the power of social media. “When I met Sean, I realized he was even more out there than I am, the stuff he posts on LinkedIn and just how he presents his genuine self at all times,” Karen recounted. “I felt like this was someone who was going to change the course of my life, and his energy and passion for this field got me very excited.”

Karen’s social media activity has been an incredible force multiplier on her ability to build relationships. She now has over 30,000 followers across Twitter and LinkedIn. She co-hosts a podcast about parenting and lawyering called In Loco Parent(i)s, with her law professor husband Steve Vladeck. She’s even made a series of TikToks (see here, here, here, and here) collabs with me, which have received over 4 million views.

The impact of all this online content can’t be overstated. In her first three months, Karen has placed as many candidates as most recruiters place over the course of an entire year. She’s now on track to earn far more than she ever did as a law firm partner. Which is incredibly inspiring because many of us believe that “doing work you’re meant to do” involves financial sacrifice.

But all this is more than just about money. Karen told me she wants to change the reputation of slimy legal recruiters who just want to move a candidate at all costs. Her goal is to genuinely help people in their careers and lives by helping connect them with the position that is right for them.

I asked if Karen had any advice for others who might be looking for their breakout role. How do you know if the opportunity in front of you is the right one?

“It’s not like someone’s going to hit you over the head and tell you that ‘this is a moment that’s gonna change your life,’” she explained. “It’s never going to be that obvious. It’s more subtle than that. Even now, when I talk to candidates for recruiting, they’re not happy where they are — but they don’t even want to take a meeting. I see my role as a good recruiter to meet people where they are in their job search journey but to also encourage candidates that they need to always be open to new opportunities in order to better their careers.”

To me, that’s the most important part of the story. You’ve got to keep an open mind. Yes, Karen experienced a lot of success in a traditional legal career through her unique combination of her intelligence, work ethic, and personality. But even so, her talents were not fully utilized in that kind of environment. So she kept an open mind.

You could probably imagine what someone might have said to Karen while she was considering the pivot. “Other people would kill to be where you are right now. Why on earth would you walk away from the partnership? Are you really going to throw it all away to just be a recruiter?”

Now I know it’s still early. We don’t know what will happen with Karen’s recruiting career, and a lot can change in the next few years. But here’s my take: Even if recruiting *doesn’t* work out — Karen’s not going to walk away empty-handed. She’s already made good money and grown her network significantly. She also has a deep understanding of how her natural talent can be combined with social media to generate a huge impact in the real world. That’s no small thing.

And if this recruiting thing does end up working out?

The sky’s the limit.

In the end, that’s what I wish for all of you. To keep an open mind about doing something different. Maybe you’re not unhappy at your job, and maybe you’re just curious about whether there’s something better out there. If that’s the case, I hope you remember Karen’s story. I want you to remember at least one example of how walking away from something that feels comfortable and safe might lead to something extraordinary.

So keep an open mind. You never know what could happen.

Alex Su is currently the Head of Community Development at Ironclad, a leading legal technology company that helps accelerate the contracting process. Earlier in his career, he was an associate at Sullivan & Cromwell and clerked for a federal district judge. Alex graduated from Northwestern Pritzker School of Law, where he was an editor of the law review and the student commencement speaker. In his free time, he writes about his career journey and legal tech in his newsletter Off The Record. You can find Alex on Twitter or connect with him on LinkedIn.

The Commonwealth – An Engine For Legal Innovation?

This Week in Rideshare: Ambulance, Groups and ‘Pumped’