Long Before The Pandemic, I Started A Virtual Law Firm To Accommodate Working Moms Like Me 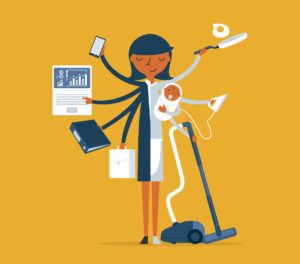 Ed. note: This is the latest installment in a series of posts on motherhood in the legal profession, in partnership with our friends at MothersEsquire. Welcome Elise Buie to our pages. Click here if you’d like to donate to MothersEsquire.

When I had my first child, everyone told me the years would fly by. However, once I had three more children and returned to work as a divorce and family lawyer, I disagreed. These know-it-alls had no idea what they were talking about. I wasn’t enjoying my job or parenting. My days were passing by all right, but in slow motion.

My lawyer husband wasn’t around much to help. Despite having a job and a demanding boss like I did, the brunt of the housework and child-rearing still fell on me. It didn’t take a genius to figure out that my husband considered his career more important. I guess I did, too, because I eventually quit. My husband seemed threatened by me working. I thought if I stopped, he might feel more confident, and our relationship would improve. I was wrong.

Even with a nanny to help during the day, the moment she left, I was flying solo. It wasn’t always like this. When my husband and I were starting our family, we both worked, and we both did chores around the house. Then, as our family grew, we fell into more traditional roles; I handled anything kid-related, including homeschooling for 10 years, and he focused almost exclusively on his job and whatever else he wanted to do.

The sad part is I helped to create this environment without even knowing by not expecting more contribution from him, a concept Eve Rodsky explores in her book, “Fair Play.” Unfortunately, her solutions came a decade too late to help.

Every day I was teetering on the brink of disaster. I was tired, stressed, and resentful. I was barely holding it together, and our marriage suffered. Engaging with the kids as little as possible, my husband’s relationship with them could’ve been better as well. Then disaster struck. Twice.

Looking for a stapler in my husband’s study, I opened the “drawer of horrors.” My husband had been unfaithful. Not with another woman, but with our finances. Tax letters revealing years of delinquencies brought me to my knees as I suffered the first of many panic attacks. I confronted my husband. He confirmed the deception, and I resolved to divorce him.

Lightning is not supposed to strike twice, but shortly after, it did. As Hurricane Katrina — the second disaster — descended on New Orleans, we evacuated our home with the clothes on our backs. Crippling debt and an empty bank account forced us to take refuge at my in-laws’ home in Georgia. Intending to stay a few days, we left a year later to make a fresh start in Minnesota.

However, my husband’s idea and mine about what a fresh start entailed diverged. Given the disruption to our children, I agreed to put our divorce on hold. But a year later, my sentiments remained. By the time we reached Minnesota, I had begun preparing for the bar, my ticket to financial, emotional, and physical freedom.

My husband wasn’t happy and emptied the little money we had in our joint bank accounts to hinder my efforts, leaving me without the means to buy a cup of chai tea while I studied. Much to his dismay, I was undeterred and regrouped instead.

I financed my endeavor by waking up even earlier to study, taking a day job as a substitute teacher, caring for the kids when they came home from school until bed, and then studying until I couldn’t keep my eyes open. That schedule lasted until the bar exam. Upon passing, I filed for divorce.

My struggles were far from over, though. Where old ones had disappeared the moment I was free from a bad marriage, others emerged or were exacerbated, most notably, my ability to practice law and raise a young family at the same time. Finally, after months of accepting low-paying legal jobs, working as a guardian ad litem, and never sleeping, I told myself I had no choice but to create a situation that would serve my lifestyle.

Again, we packed up, this time without my husband (he would later follow to co-parent), and moved further west to Seattle. There, I recognized opportunity and favorable tax laws, which would put a little more much-needed money in my pocket each month to support my family.

Without any professional contacts, I signed up for networking event after networking event to market my skills as a divorce and family lawyer, guardian ad litem, and divorced mom in the process of surviving what my new clients were only beginning to face — uncertainty. I could empathize.

Slowly, one case became two, and two became three, inspiring me to hang a virtual shingle from my home office, where I was rarely more than a few feet from my kids. I still got up early and went to bed late, but now I was doing it as my own boss, on my own terms, and without having anyone breathing down my neck to tell me the workday began promptly at nine and ended … whenever.

Happier, I did better work, worked more efficiently, and was well-positioned when the pandemic struck and forced law firms and companies to become entirely virtual like I was. I already knew what so many of my colleagues, particularly working moms like me, came to discover. And that is when we apply the same creativity and compassion we have for our clients to ourselves, we can reach new heights at the office and home, even if the office is home.

Today, my team numbers more than 30, which includes attorneys and paralegals, marketing, intake, and finance departments, as well as support staff. The best part is many of them are working moms like me, at various stages of parenthood (and grandparenthood).

I still watch the sun come up. But it’s not because I have to; it’s because I want to. I would do it all again, too, because with flexibility came freedom. And the opportunity to be the working mom I always envisioned myself to be.

Elise Buie, Esq. is a passionate, creative, problem-solving family law attorney who creates solutions, not obstacles. After evacuating her hometown of New Orleans during Hurricane Katrina and surviving a divorce, Elise landed in Seattle and founded her law firm. Elise’s practice involves all aspects of divorce and family law, guided by a collaborative philosophy and her deep understanding of complex parenting issues. Elise opened her firm during a period of personal adversity. Now in a period of global adversity, Elise’s firm has experienced its most significant growth yet, which she attributes primarily to her driving force and mantra: “I can do it.”

How is Workplace Culture Related to Sexual Harassment in Louisiana?

The More Things Change, The More They Stay The Same: A Law Firm Debacle

Can a Harassment Lawsuit Be Dropped?