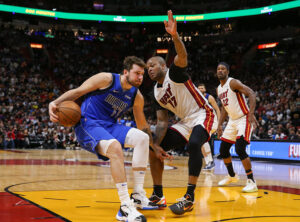 Normally when we talk about trademark disputes, they tend to look fairly similar. Some entity is upset and/or sues over a trademark they have and we spend some time analyzing whether the trademark itself ever should have been granted, whether there is true customer confusion to worry about, whether the plaintiff is simply bullying, etc. But the story of Luka Doncic’s attempt to wrest control over the trademark for his own name and jersey number is something completely different and has us in uncharted territory.

I’ll give you the background as briefly as I can. Luka77, Inc. is the company Doncic has tasked with promoting his name and likeness rights. The company attempted recently to register trademarks for Doncic’s name and some variations that include his name and other verbiage. The USPTO refused those applications due to there being a similar registered mark, “Luka Doncic 7”. That trademark is owned by none other than a woman named Mirjam Poterbin, although Luka Doncic can simply call her “mom”.

Luka77, through its attorneys from Brown Rudnick, says the USPTO “preliminarily refused” to register the company’s 2021 applications for LUKA DONCIC and ORIGINAL HOOPS OF LUKA DONCIC on grounds that they’re too similar to LUKA DONCIC 7 and might spark confusion. A third application concerning LUKA DONCIC for use in charitable fundraising services hasn’t been acted upon.

Luka77 acknowledges that Poterbin filed the original application “with Mr. Dončić’s consent.” Dončić was a 19-year-old NBA rookie at the time, and thus an adult and a professional. He was represented by agents Bill Duffy and Quique Villalobos of BDA Sports Management.

Doncic became a pro basketball player in Spain at age 13. It is no surprise that he looked to a parent to assist him with the business side of basketball at that time, busy as he probably was trying to figure out how to use a razor blade and all that. As such, he granted permission to his mother to register trademarks including his name.

But Doncic is a full-blown NBA star now, and an adult. He is contracting with a company to handle his business. As such, that company has petitioned the USPTO to cancel Poterbin’s mark for several reasons.

One is that Dončić is no longer “affiliated or associated with [Poterbin] or its goods and services.” He also “does not approve or sponsor [these] goods and services.” This is particularly problematic, Luka77 argues, since consumers are inclined to presume that, given Dončić’s fame and reputation, he is connected to LUKA DONCIC 7, which is “largely comprised of the name that identifies Mr. Dončić.” Luka77 also points out that Poterbin has allegedly “abandoned any and all rights” in the mark by not using it, with no known licensees.

The abandonment claim might end up being the most important of the bunch. Why? Well, because nobody really seems to know if permission of the sort Doncic granted his mother can be rescinded in order to cancel previously registered trademarks.

She recalls several cases in which consent was never explicitly made “of record,” so the celebrity was able to successfully cancel a registration that referenced them; courts have also canceled registrations where a celebrity granted a license to use their name and that license expired.

“But no case litigated to decision in court or before the TTAB appears to test the precise scenario Dončić now faces,” Roberts said. “Surely, Dončić is not the first and he won’t be the last to consent to the registration of a mark that references him and later change his mind. Roger Federer’s dispute with Nike over the brand’s continued use of a logo comprising his initials after he left Nike for Uniqlo offers one example, but that case was rooted in a separate endorsement contract between the parties.”

Roberts also said, “there are right of publicity concerns embedded in these doctrines as well” and that while Dončić wasn’t a minor when he gave consent, the board will consider that “he was fairly young and inexperienced.” She added that the board can cancel the registration if Dončić establishes his mother isn’t using the mark in commerce in the U.S. and lacks intent to resume any use.

Roberts goes on to note that there doesn’t seem to be any requirement in the Lanham Act that the consent to register a trademark must be ongoing after the mark is registered. If Poterbin is using or can show intent to use her trademark in the United States, well, that might be all she needs to defeat her son in front of the USPTO.

But this goes beyond one family trademark drama. With college athletes in particular suddenly having NIL rights, you can damn well bet they and their agents will be watching this case closely. If permission for this sort of thing can’t be granted temporarily, well, then you can bet athletes will be far less likely to hand over permission than they were before.

Gavin Newsom Fucks Over The Open Internet, Signs Disastrously Stupid Age Appropriate Design Code
Court To Public University: Yeah, It’s A 1st Amendment Problem When You Delete Comments You Don’t Like
Even The Copyright Office Doesn’t Want What The JCPA Is Selling

Vehicles That Can Be Subject to Commercial Regulations in Tucson