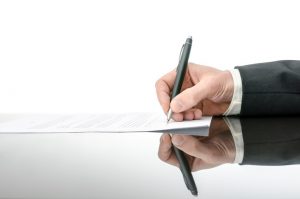 This week saw the introduction of the The Terms-of-service Labeling, Design and Readability Act, or “TLDR Act,” for short. The bill, which, for now, has bipartisan support, would require the FTC to create rules mandating that websites must offer a truncated version of obnoxiously long and predatory terms of service (TOS) nobody actually reads. The “summary statement” websites would be obligated to provide would not only lay out the legal requirements in terms normal humans could understand, it would also require a website disclose any major data breaches that have occurred in the last three years.

A breakdown (pdf) of the bill also states it will require websites to disclose what data is collected upon a user’s visit, and what kind of control a user has over that data. Any violation of the new law would be declared to be within the realm of “unfair and deceptive” under the FTC Act, giving the agency the authority to act on it. Rep. Lori Trahan had this to say about the need for such a law:

“For far too long, blanket terms of service agreements have forced consumers to either ‘agree’ to all of a company’s conditions or lose access to a website or app entirely. No negotiation, no alternative, and no real choice,” said Congresswoman Trahan, a member of the House Subcommittee on Consumer Protection and Commerce. “To further slant the decision in their favor, many companies design unnecessarily long and complicated contracts, knowing that users don’t have the bandwidth to read lengthy legal documents when they’re simply trying to message a loved one or make a quick purchase.”

Yes, most TOS are overlong and that length is often used to obscure bad behavior or quietly erode consumer rights (see: binding arbitration). But many TOS are also overlong because U.S. law and compliance are complicated as hell. The idea that you can always simplify everything a company needs to get across to a user to comply with the law and reasonably cover your ass in a sentence or too is probably a little simplistic. At the same time, I’m not sure the American consumer, many with the attention span of a goldfish, would even read the truncated version of a TOS anyway.

While “more transparency” is certainly good, it also only goes so far if you’re not willing to tackle the deeper problem(s). For example the FCC is pondering a transparency label on broadband connections outlining all the sneaky ways you’re getting ripped off by your internet service provider. And while knowing the precise parameters how you’re getting ripped off is nice, users in monopolized markets can’t switch ISPs anyway because the FCC generally isn’t willing or able to combat monopolization and limited competition. So transparency only accomplishes so much.

Here too, websites, apps, and services use overlong TOS to obfuscate all manner of behaviors U.S. regulators either don’t have the resources to police (the FTC has 8% of the staff dedicated to privacy issues as the UK, despite the UK having one-fifth the consumers to protect) or are apathetic to because of revolving door corruption (see: telecom, banking, adtech, etc.). Expecting the FTC to do a whole lot more stuff without notably expanding funding seems a bit short sighted. And this is all assuming the bill is actually well written and doesn’t cause new, unforeseen problems via sloppy language.

So while well intentioned, this feels like a bit of a band aid on problems policymakers can’t or won’t tackle head on. Like limited competition. Or the complete and total lack of anything even vaguely resembling accountability in telecom, adtech, or the data broker space. Or privacy reform. Or antitrust reform. All of these problems lead to bad behaviors companies are hiding in their TOS, and making those bad behaviors clearer to the end user is only part of a process. Knowing you’re getting screwed or spied on is only helpful if you have the recourse to do something about it, and regulators willing to stand up for you when push comes to shove.