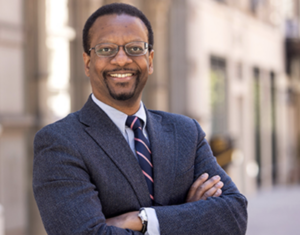 Troy McKenzie, a class of 2000 NYU Law grad, will come full circle and take over as dean of the NYU School of Law on June 1. McKenzie will become the school’s first Black dean and the only Black dean in the T14.

McKenzie joined the faculty in 2007 following a clerkship with Justice Stevens and a stint at Debevoise and has taught at the school ever since, with the exception of a two-year gig as a deputy assistant attorney general in the Office of Legal Counsel.

He takes over from Trevor Morrison — Trevor Effin’ Morrison to real ATL heads — who leaves the job after spearheading a massive $540 million capital raise. McKenzie surely has some high-minded and non-petty plans for that money, though his first task to my mind is reversing the crime against humanity that is NYU slipping behind the Amy Wax School of Law in the U.S. News rankings.

Michael Kasdan, a 2001 grad, NYU adjunct professor, and partner at Wiggin & Dana, had this to say:

In my view, Troy McKenzie is an absolutely inspired choice as the next Dean of NYU School of Law. Troy was my TA for torts during my 1L year and has always been approachable, engaged and friendly despite having what might otherwise be an intimidating intellect. Years later when I joined NYU as an adjunct and was a bit timid about entering the sanctuary of the teachers lounge, Troy was always a friendly and welcoming face. He’s really everything you want in a leader – whip smart, authentic, inclusive and collaborative.

Move Over First Amendment: The EU Has A Few Thoughts About Your Tweeting

Reality Check: Twitter Actually Was Already Doing Most Of The Things Musk Claims He Wants The Company To Do (But Better)

Reality Check: Twitter Actually Was Already Doing Most Of The Things Musk Claims He Wants The Company To Do (But Better)

When Can Sexual Harassment by a Supervisor Cause a Connecticut Employer to be Held Accountable?