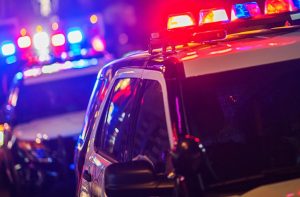 Ohio cops just can’t seem to get their head around First Amendment protections. A case hopefully en route to a Supreme Court review involves Parma, Ohio cops who decided it was completely legal to arrest a town resident for creating a clearly satirical Facebook page that suggested the Parma PD was offering free abortions in a roaming van and promoting a “pedophile reform” event.

In another case, a cop temporarily managed to obtain an injunction forbidding people from publishing his name while he sued several Cincinnati residents for libel for suggesting he might be a racist. That cop’s name is Ryan Olthaus and he has a long history of use of force complaints.

And, in yet another case, a woman was arrested by Ohio cops for repeating a false rumor that a gun had been found at a school. She did not originate the rumor. She just repeated it. And for that, she was sentenced to 180 days in jail and stripped of access to social media sites for a year.

So, it’s perhaps unsurprising that this state is home to yet another egregious violation of First Amendment rights. An ongoing murder trial involving multiple defendants has resulted in the editor of small local paper being arrested for performing an act of journalism.

As Adam Steinbaugh’s post for FIRE points out, courts permit recordings and broadcasting of criminal trials. There are a few exceptions. The relevant exception here is that witnesses can request their testimony not be recorded or broadcast and, if the court agrees, this permission is revoked during this testimony.

One of the defendants in this trial — Jake Wagner — made this request and had it granted. Nonetheless, someone attending the trial recorded it and passed it on to Derek Myers, who runs the Scioto Valley Guardian. That act of fully protected First Amendment expression led to this:

On Oct. 28, the Guardian published ten minutes of audio — recorded by someone else in violation of the court order — of Jake Wagner’s in-court testimony, with this note:

The Guardian received a portion of Jake Wagner’s testimony on his first day on the witness stand. The Guardian wants to disclose that the audio was not recorded by a member of the media and was submitted to the Guardian’s newsroom by a courthouse source who is authorized to have their cell phone in the room.

Myers was arrested on Nov. 1 pursuant to a warrant obtained by Sgt. Joshua Carver of the Pike County sheriff’s office. That same day, Sgt. Carver seized Myers’ laptop from a room at the courthouse used by journalists reporting on the trial.

There’s more. When Myers entered the courthouse the following day, a deputy ordered him to relinquish his cellphone. At first, the deputy claimed they were forbidden in court rooms (they aren’t). When Myers pointed out he was headed to the journalists’ room, rather than the courtroom itself, the deputy then claimed he had a warrant authorizing the seizure of the device. (He didn’t.)

FIRE went the extra mile and obtained the warrants acquired by the Pike County Sheriff’s Office. As Steinbaugh points out, the search warrant [PDF] had already expired by the time it was executed on November 1. (Unfortunately, it being only 24 hours out of date means good faith will probably be awarded, at least in terms of this issue during the lawsuit that’s almost certainly in the works.)

More importantly, the search warrant only authorized the seizure of Myers’ laptop. It said nothing about his phone. (That’s going to be harder to surmount when the Sheriff’s Office attempts to defends its actions.)

It’s not a matter of the warrant being imprecise about what the Sheriff’s Office was looking to seize and search. Two paragraphs at the opening of the warrant make it clear the office wanted access to the “contents of the computer,” as well as any internal and external drives capable of containing information. Another paragraph later in the warrant provide a physical description of the only device sought by investigators:

Memory storage located in/on a silver/grey in color MacBook laptop (more fully show in Exhibit A) found in the media room of the Pike County Court of Common Pleas.

So, nothing about a phone until a deputy unilaterally decided he was legally allowed to take it simply because Myers refused to voluntarily hand it over.

And even if the warrant is still deemed valid (at least in terms of its apparent expiration, if not its scope), it would still be a warrant unsupported by longstanding law. And it would definitely be a violation of this journalist’s rights.

As the Committee to Protect Journalists rightly pointed out in condemning the arrest and searches, the federal Privacy Protection Act and an Ohio state statute shield Myers from searches of journalistic “work product.” The federal law, in particular, prohibits law enforcement from effectuating any search or seizure of a journalist’s work product unless the journalist has committed a criminal offense other than “receipt, possession, communication, or withholding” the information or materials at issue.

Then there’s the arrest warrant [PDF]. The warrant claims Myers violated the law by ignoring a court order forbidding Myers or anyone else from recording Jacob Wagner’s testimony. That the court’s order was undoubtedly violated is true. That the paper’s editor was the violator is, at the very least, an arguably false claim. The Sheriff’s Office had Myers arrested, but it did so citing a statute that suggest the Office doesn’t actually believe Myers created the illegal recording.

That accusation says Myers received an illegally-obtained recording. The publication, however, is covered under this law. It’s covered under the First Amendment. Unless the Sheriff’s Office has probable cause that Myers created the recording or was directly involved in ensuring the testimony was illegally recorded, the arrest warrant is also invalid. The court order only forbade the media from recording the testimony. It did not forbid (nor could it) the publication of any illicit recording.

That’s definitely going to cause problems for this prosecution, should prosecutors decide to add themselves to the list of civil rights lawsuit defendants by pursuing this. And it’s going to cause more problems for the involved law enforcement officers, who should have known that targeting a journalist for publishing information in the public’s interest would place them on the wrong side of the Constitution. This wasn’t wiretapping. This was journalism.

And yet, Myers is still considered an accused felon. Myers wants this to go to trial because he is in the right. The reality is that Myers has had to post a $20,000 bond, must submit to alcohol/drug tests [???], and keep his schedule open to attend any court hearings until the charges are either dropped, or he’s cleared by the court.

Why must he do this? Because the government is clearly in the wrong, yet has the luxury of being wrong until proven otherwise. The government suffers no financial loss or restrictions of its powers. It’s only Myers being punished for being good at his job. This is not the way things are supposed to work here in the United States. This is happening because law enforcement is more willing to do what it wants than do what is right.

Your Guide To Getting Paid In The New Normal