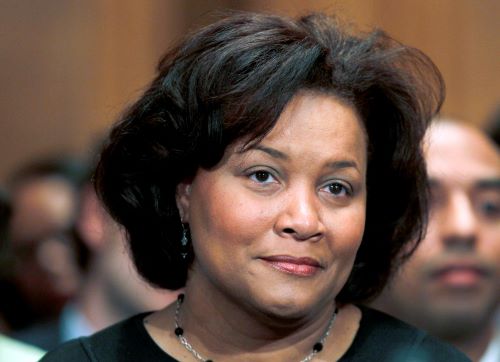 U.S. District Judge J. Michelle Childs, a potential U.S. Supreme Court nominee, wins high praise from lawyers who practiced before her and those who worked with her. But some liberal critics see her work for a management-side labor law firm as a negative.

Childs is being praised for her even temperament and her concern for others beginning their careers, Law.com reports.

Former clerk Amber Hendrick told Law.com that Childs often used the phrase “hold the ladder down” to describe her philosophy of helping others rise in their careers. Childs held the ladder down for her clerks and for law students, said Hendrick, now a senior associate at Nelson Mullins Riley & Scarborough.

The White House confirmed last week that Childs, a federal judge for the District of South Carolina, was among several Black women being considered to replace retiring Justice Stephen G. Breyer for the Supreme Court. Childs has been nominated to U.S. Court of Appeals for the District of Columbia Circuit, but the confirmation hearing was put on hold while President Joe Biden considers her for the Supreme Court.

Childs, who has had leadership posts in the ABA, has the backing of U.S. Rep. James Clyburn, the House majority whip and a Democrat of South Carolina. Republican U.S. Sen. Lindsay Graham of South Carolina also had good things to say, telling Face the Nation on CBS News on Sunday that Childs is “a fair-minded, highly gifted jurist.”

Two lawyers who have had cases before Childs—John Reagle of Columbia, South Carolina, and Donald Brown Jr. of Charlotte, North Carolina—also praised Childs in interviews with Law.com.

Reagle called Childs “a first-rate judge” who was always prepared and organized.

“There is a sense she is being fair and considerate,” he said.

She writes well-reasoned and thoughtful opinions, he told Law.com, “although I don’t always agree with them.”

Childs wrote more than 2,500 opinions as a district court judge, according to ABC News.

“Appeals have been filed in approximately 500 of those matters,” ABC News reports. “In the vast majority of those appeals, the U.S. Court of Appeals for the 4th Circuit has either dismissed the appeal or affirmed Judge Childs’ decision. Her decisions have either been reversed or vacated in less than 1% of the cases over which she has presided.”

One of her notable decisions was Bradacs v. Haley, in which Childs ruled in 2014 for two women who wanted their marriage in Washington, D.C., to be recognized in South Carolina, according to ABC News. Childs ruled before Supreme Court held in 2015 that same-sex marriage is a right protected by the Constitution.

Childs issued another high-profile decision in 2020, when she struck down a witness requirement for absentee ballots in Middleton v. Andino. The 4th Circuit affirmed, but the Supreme Court disagreed and reinstated the requirement, except for ballots already cast and received.

If Biden nominates Childs, there is a potential downside for him—her past work for management-side labor firm Nexsen Pruet, according to the American Prospect. Childs worked at the law firm from 1992 to 2000, first as an associate and then as a partner. She mostly worked in labor and employment, mostly for employers.

Childs “looks much more like the typical corporate lawyer that the White House has purposefully tried to get away from in its attempt to remake the federal bench,” according to the American Prospect.

One critic of her law firm work is Joseph Geevarghese, executive director of Our Revolution, a political organization, the Associated Press reports.

“Workers do not need another anti-labor justice actively opposing the very labor protections this administration is working to uphold and expand,” Geevarghese said.

“There’s not a biased bone in her body,” Eslinger said.

White House spokesperson Andrew Bates pointed to Childs’ work as a commissioner for the South Carolina Workers Compensation Commission after leaving Nexsen Pruet, the Washington Post reports. Her tenure there “was defined by fighting for injured workers,” he said.

Childs, a graduate of the University of South Carolina School of Law, was elected as a state court judge in 2006. Then-President Barack Obama nominated her to the federal district court in 2010.

ABAJournal.com: “These 2 judges are considered front-runners to replace Breyer; who else is getting mentioned?”

Why Should You Get Interested in a Custom Closet Franchise?


Warning: unlink(/tmp/jnewsfirstload-SbfnDK.tmp): No such file or directory in /home/customer/www/dailylegalbriefing.com/public_html/wp-admin/includes/class-wp-filesystem-ftpext.php on line 142