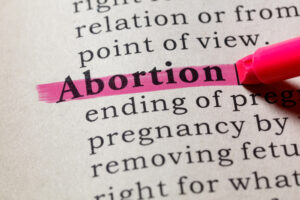 Now that the Supreme Court has overruled Roe v. Wade and “trigger laws” are going into effect across the country to ban abortion in the wake of Dobbs, it seems that would-be law students are taking action and planning to steer clear of applying to law schools in states where abortion has been outlawed.

As first reported by Christine Charnosky of Law.com, prospective law students have taken to Reddit to discuss whether they think applications will drop for law schools located in southern states where reproductive rights have effectively been terminated.

“I completely took any southern state off of my law school list,” posted user Prince_Law. “The only one remaining are schools in Virginia because that’s where my top school is and they haven’t banned abortion yet.”

“I’m genuinely scared of what will happen in the future and if it’s worth going to my top school if that means I will lose my rights to be there,” Prince_Law continued. “I’m on birth control now, but it can fail and things can happen. I don’t want to have to be forced to give up my career.”

Kindly-Warning-1840 added, “Honestly, it affects my decision. I have a few southern schools that I left that are high hopes and if I got in, great. But for a mediocre school, I’m not going to stay here.”

Additionally, lambchop333 said they believed that fewer women will apply to schools in those states that ban abortion, arguing that “more educated women support a women’s right to choose.”

While others like users Wtare and LWoodsEsq. agreed with these sentiments, they noted that “good law schools will have their pick of students anyway,” and that “higher ranked southern schools would be less affected because people will still be desperate to go to a T20.”

Others still expressed concern about rights that have yet to be “reconsider[ed]” by the Supreme Court, but that were specifically called out by Justice Clarence Thomas in his Dobbs concurrence (i.e., rights to contraception access, same-sex relationships, and same-sex marriage).

“As a ‘23 applicant with a uterus with red state schools on my list, I considered the same thing,” lift-laugh-law said. “My first thought was ‘well I’d just go home if I really needed something’” since they live in one of the “safest states” for reproductive rights.

“But the more I consider things,” they said, expressing concern about LGBTQ+ rights and possibly even interracial marriage rights “being next on the chopping block,” they said they’re “thinking in the long term, I’m afraid of getting stuck in a state where both my reproductive rights & my freedom to love are limited.”

Seeing the greater picture here, user Bakerofhabit was right on the money with this comment: “This isn’t just a where you go to law school decision…this is a life decision. Can’t gamble with your health and livelihood like that.”

Will you be crossing some law schools off your list because they’re located in states where abortion is now illegal? Please let us know via email at tips@abovethelaw.com or send us a text at (646) 820-8477. Thanks.

‘This Is a Life Decision’: Will Abortion Bans Affect Law School Applications? [Law.com]

What are Some Illegal Reasons to Terminate a Worker in Kentucky?

Pretrial risk-assessment tools should only be used if they’re transparent and unbiased, warns ABA House