Remember When A Law School Prof Said Only 500 Americans Would Die Of COVID? Whatever Happened With That? 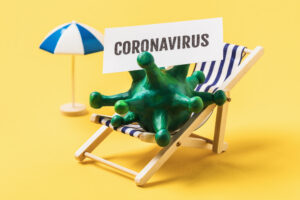 The nice, friendly COVID that Epstein thought we’d have in March 2020.

It’s been about 20 months since NYU Law professor Richard Epstein published an article declaring that America had nothing to fear from the novel coronavirus because it would only claim the lives of, approximately, 500 people. He based this prediction on his own “Darwinian Economics” model because he is, after all, not a scientist or a doctor but a law professor.

Surprisingly, Epstein’s complete lack of qualifications and basic common sense resulted in a truly spectacular miss. Even after “revising” his numbers to admit that he really meant 5,000 fatalities — a move he made when it became clear the country had passed the 500 mark before he even published his original article. As it turned out — when the data all came in — deaths in the U.S. had already more than doubled the 5,000 figure by the date of his update. Oopsie.

For the record, as of this morning, the total is 789,164 plus whatever deaths Florida and Alabama are sitting on rather than reporting. It’s been a while since my econometrics days, but is 157,732% a statistically significant miss? In his defense, the principle behind his figurin’ had a glancing connection with science. Viruses often weaken over time as natural selection favors strains that keep hosts alive longer. They just do it over the course of “years” or “decades” as opposed to “a couple weeks” as Epstein’s March 2020 hypothesis would have required. And, this trend isn’t a guarantee as some viruses can and do mutate to become more deadly, something Epstein might have wanted to ask a doctor about before hinging his analysis on it.

The musings of a public health dilettante would be hilarious if their impact weren’t so tragic. Epstein’s bad math worked its way to the highest levels of government, encouraging Trump officials in their efforts to slow-play the response to the disease. When confronted over his epic fuck up, Epstein made Freud blush by calling the interviewer “a complete intellectual amateur.” He continued his epic bout of projection by telling the reporter, “You’re a journalist. Would you like to compare your résumé to mine?” as if he wasn’t a Torts professor who’d just tried to explain epidemiology to the National Institutes of Health.

But this is the whole problem with the legal academic complex. Epstein’s still out there using his law school credibility to opine on stuff he doesn’t understand from climate science to border policy. Positioning law professors as public intellectuals isn’t necessarily a bad thing — a lot of issues include legal angles — but when law professors cross that line into spouting off with impunity about subjects far afield of their actual expertise, we end up with this sort of dangerous nonsense.

Epstein deserved the roasting he took back in March of 2020. But then the world moved on and let him continue pontificating from his perch. The whole idea for this article came to me after I saw Epstein featured as a panelist in a discussion about reparations the other day and thought, “How is anyone inviting this guy to speak without branding him as the guy who said COVID would only kill 500 people?”

Defining people by their biggest mistakes isn’t always the right move, but this is the sort of disastrous error — caused by a clueless hubris that was evident at the time to everyone outside Epstein’s ideological bubble — that no one should ever forget.

The Contract Topics On The Business World’s Mind

How You Can Take On eDiscovery Without Feeling Overwhelmed

How You Can Take On eDiscovery Without Feeling Overwhelmed