Republicans Warn 51 Biglaw Firms To Stop Telling Clients About Climate Change Or Else! 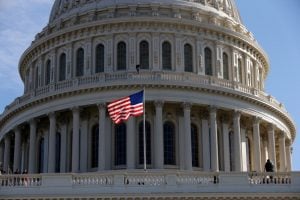 “Nice little free market your clients have here… shame if anything happened to it.”

These words don’t appear in a recent letter sent by Senate Republicans to 51 Biglaw firms, but that’s the crux of the message.

With polling leaning toward a good day for Republicans tomorrow, a group of GOP senators took some time to reach out to the most high-powered law firms in the country to preview their next big agenda item: threatening corporations making commitments to address climate change!

And, while they’re at it, the lawmakers offered a not-so-subtle signal that they won’t look too kindly on corporate boards talking about diversity either.

Tom Cotton, Mike Lee, Chuck Grassley, Marsha Blackburn, and Marco Rubio blasted the Biglaw world from A to W (Akin to Winston) with a not-so-veiled threat that a Republican-controlled Senate plans to step up attacks on companies embracing ESG (environmental, social, and governance) initiatives.

We are writing about your firm’s Environmental, Social, and Governance (ESG) practice. Although businesses would certainly be wise to lawyer up before undertaking ESG initiatives, your firm has a duty to fully inform clients of the risks they incur by participating in climate cartels and other ill-advised ESG schemes.

There is a nugget of truth to the specific warning. Scholars suggest that some of the most impactful possible climate responses may require industries to collaborate to disincentivize “first movers” who might initiate a race to the bottom and undo environmentally conscious policies. It’s actually an area where antitrust law should be reformed to clarify that anticompetitive acts for environmental — rather than anticompetitive — ends will not be subject to penalty. But the Republicans are going a different way with it…

Of particular concern is the collusive effort to restrict the supply of coal, oil, and gas, which is driving up energy costs across the globe and empowering America’s adversaries abroad.

One might think that Putin invading a neighboring country and throwing the world energy supply into chaos coupled with an ACTUAL CARTEL cutting back supply and transnational energy companies take advantage by doubling profits on top of the supply shock has a tiny role in raising energy prices too. But, no, it’s apparently just IBM agreeing to use more renewable energy. That’s the ticket.

It also doesn’t even make sense because the sort of environmental collusion being discussed would make it harder for industries to use fossil fuels thereby increasing the available supply for everyone else. If anything, the hypothetical proposals the Republicans are complaining about would lower energy prices for average Americans.

Any collusion that impacts input prices would be passed on to the consumer and increase the price of the end product slightly but “driving up energy costs”? That dog won’t hunt.

The ESG movement attempts to weaponize corporations to reshape society in ways that Americans would never endorse at the ballot box.

And here’s the real nub of the letter.

Because law firms know which ESG initiatives cross the line into exposing their clients to antitrust prosecution and which don’t. There’s no risk that Cleary or Skadden is going to tell a company to run headfirst into an FTC complaint. But Cotton and his cronies want to make clear that the GOP intends to use its power — from dragging boards in front of committees to, eventually, slapping them with criminal probes signed by future AG Sidney Powell — whenever a company goes vaguely “woke.”

The unlikely but at least possible risk of companies joining a cross-industry commitment to reduce emissions is just the hook. This letter aims to put law firms on notice that ESG is the next battleground facing clients.

It’s as a chilling of a letter that one can write in Biglaw-ese.

Yet what can they really do about this? Companies operating in the global economy don’t have the luxury of ignoring ESG mandates. The European market demands them. Investors demand them. In some cases, the exchanges demand them. And undergirding those demands is the harsh reality: consumers demand them.

Republican administrations dutifully abdicate any role in corporate governance, but they’re not the only game in town anymore. To thrive in the market in 2022, corporations need to signal basic good behavior to consumers. Conservatives may not like the fact that the majority of the country — and overseas markets — want companies addressing climate change, but that’s where we are. To this extent, the letter is motivated, like a lot of GOP rage, by the recognition of their own impotence.

Today it’s antitrust. Tomorrow it will be that corporations breach their duties to shareholders for making Pride Month Oreos. The issue doesn’t really matter, the whole point of the letter is to announce that the Republicans are coming for private companies.

Remember when Republicans were all about free markets and capitalism? Seems like a long way off right now.

Earlier: The United States Dropped The Ball On Corporate Responsibility… Outsiders Picked It Up And Ran

Being The Change You Want To See

When Free Speech Cost $8: Musk’s Twitter Censorship Is Going About As You’d Expect It To

When Free Speech Cost $8: Musk's Twitter Censorship Is Going About As You'd Expect It To

Lawyer Dresses As Hot Dog For Halloween Deposition, Gets Burned