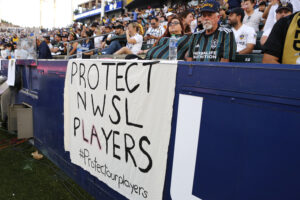 As reported by Law360, some of the allegations that came to light during the course of the investigation demonstrate just how widespread the problem is in the league:

According to the report, coach Christy Holly of the Racing Louisville Football Club once called in a player to review game film and showed her pornography instead. Rory Dames, who coached the Chicago Red Stars, was notorious at the highest levels of women’s soccer for alternately berating his players and then quizzing them about their sex lives. Paul Riley was fired by the Portland Thorns after several complaints by players to team and league officials had gone overlooked for two years. He was still hired by another league team shortly after his firing, without team officials informing his new employer of the allegations.

Unfortunately, there was less than full cooperation with the investigation around the league:

Three women’s soccer clubs — the Portland Thorns, the Chicago Red Stars and Racing Louisville — did not fully cooperate with the investigation and in some cases impeded it, the report said. Jeff Plush, the league’s commissioner from 2014 to 2017, never responded to attempts to interview him, the report said, and Dan Flynn, who retired as CEO of U.S. Soccer in 2019 after 19 years in office, declined to sit for an interview and responded only to written questions.

The Player’s Association noted how painful the environment is to work in, and looked forward to working toward a safer league:

“Our goal is to marshal all the facts to inform evidence-based recommendations about how to advance the goal of a league centered on player safety,” the statement said. “As difficult as this report is to read, it has been even more painful for players, whether known or unknown, to live it.”

The report made recommendations on how to change the culture of the league, which include investigating and holding coaches accountable, better vetting of hires, and advocating for players.

Cone said U.S. Soccer would immediately put at least three of the recommendations into action: create a new Office of Participant Safety in charge of policy and reporting mechanisms, begin publicly identifying those who have been punished for their conduct rather than concealing them, and establish background checks for all participants from youth soccer leagues on up.

There is a separate investigation, commissioned by the league, being conducted by Covington & Burling. That investigation, led by partner Amanda Kramer, is ongoing.