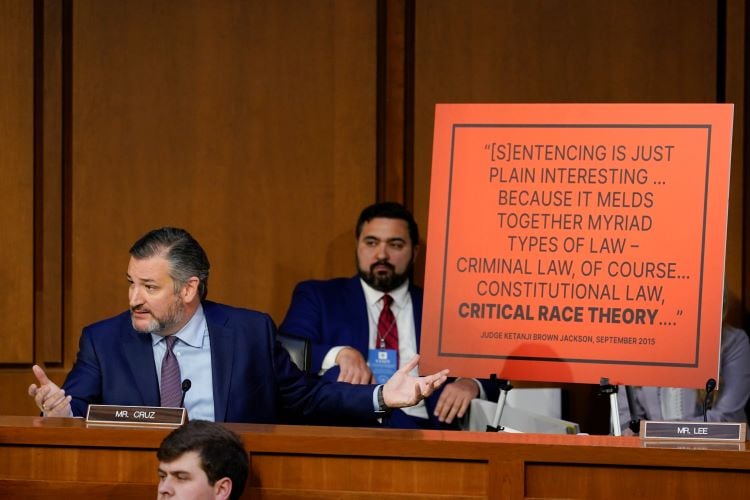 Republican Sen. Ted Cruz of Texas quizzed U.S. Supreme Court nominee Judge Ketanji Brown Jackson about critical race theory Tuesday, leading to his questions about whether it is taught at a private school where she is a member of the board of trustees.

Jackson gave her definition of the theory, with a caveat: She doesn’t use it as a judge.

“My understanding is that critical race theory is an academic theory that is about the ways in which race interacts with various institutions,” Jackson told Cruz during her confirmation hearing before the Senate Judiciary Committee.

“It doesn’t come up in my work as a judge. It’s never something that I have studied or relied on. And it wouldn’t be something I would rely on if I was on the Supreme Court,” she said.

Cruz said critical race theory frames society as being engaged in a fundamental and intractable battle between the races. The theory views every conflict as a racial conflict, he said. Cruz asked: Do you think that’s an accurate way of viewing society?

“Senator, I don’t think so,” Jackson replied. “But I’ve never studied critical race theory, and I’ve never used it. It doesn’t come up in the work that I do as a judge.”

Cruz asked Jackson whether critical race theory is taught in schools. Jackson replied that she thinks that it is taught mainly at the law school level.

Cruz then questioned Jackson about use of the theory at the Georgetown Day School, where she has served as a member of the board of trustees since 2019, according to previous coverage by Fox News.

Jackson had said on her Senate questionnaire that, since becoming part of the Georgetown Day School community, she and her husband had “witnessed the transformative power of a rigorous progressive education that is dedicated to fostering critical thinking, independence and social justice.”

Cruz asked: What did you mean by social justice?

Jackson said the Georgetown Day School has a special history. It was founded as a private school in 1945 in Washington, D.C., by Black and white families when segregation was required by law.

“The idea of equality, justice is at the core of the Georgetown Day School mission,” she said.

Cruz proceeded to ask Jackson about books that he said are assigned or recommended at the day school. The school curriculum, he said, “is filled and overflowing with critical race theory.”

One book, he said, teaches that babies are taught to be racist or anti-racist, and there is no neutrality. Another portion of the book recommends that babies confess when being racist, he said. Cruz asked: Do you agree with the idea that babies are racist?

She said she doesn’t know whether critical race theory is taught at the Georgetown Day School because the board doesn’t control the curriculum.

ABAJournal.com: “Are government bans on the teaching of critical race theory unconstitutional?”

How Much is the Minimum Capital Required to Join a Home Building Franchise?