Senators Klobuchar And Warren Are Mad That Meta Is Taking Down Abortion Posts; If They Were Serious, They’d Protect Section 230 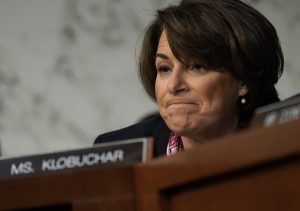 Almost exactly a year ago, Senator Amy Klobuchar (with Senator Ben Ray Lujan) introduced a bill to create a giant hole in Section 230 for “medical misinformation.” The bill would make social media sites like Facebook and Instagram potentially liable for any “health misinformation” found on their platforms. Of course, as we explained at the time, this is a horrifically dangerous idea on multiple levels. First, since there is no set definition of “medical misinformation” (and, in times of rapidly changing information, like a pandemic, accurate information may initially be labeled misinformation), it means that websites will be much more aggressive in taking down content. Second, it opens the door to widespread abuse because whoever is in power gets to determine what is, and what is not “medical misinformation” (the bill gave that role to whoever was the Secretary of Health and Human Services).

Given all that, it seems wildly ironic, that Senator Klobuchar (now with Senator Elizabeth Warren) have sent Mark Zuckerberg (and Instagram CEO Adam Mosseri) an angry demand letter over the news that Facebook has been banning people for simply mentioning that abortion pills exist following the Supreme Court’s Dobbs decision overturning Roe v. Wade.

If Klobuchar got her way and her medical misinformation bill became law, it’s guaranteed that Facebook and Instagram would be taking down way more posts about abortion. Because they’d be sued left and right if they didn’t.

I am honestly perplexed at who the hell works in Klobuchar’s office that handles internet policy, because they seem to have less than no clue about how any of this works. For fuck’s sake, talk to someone who understands this stuff.

But, first, let’s look at the letter.

We write to express our concern about reports that Facebook and Instagram are censoring posts containing accurate information about abortion in the wake of the Supreme Court’s decision in Dobbs v. Jackson. As a result of the Court’s decision, it is more important than ever that social media platforms not censor truthful posts about abortion, particularly as people across the country turn to online communities to discuss and find information about reproductive rights.

Yeah, sure, that makes sense (though, I again question the use of “censor” here when we’re talking about a private platform making moderation choices). And I’ll note that both Warren and Klobuchar have been aggressive over the last few years in suggesting that Facebook does far too little moderation — so it comes off a bit rich for them to now be complaining that the company does too much. It just reinforces the notion that everyone thinks that the “right” way to do moderation is however they, themselves, would do moderation.

Last month the Supreme Court overruled Roe v. Wade, stripping away constitutional protections for abortion. In the aftermath of the decision, many took to social media to share stories about the impact of the decision, let others know how to legally obtain abortion services, and to discuss their personal experiences. Posts about abortion spiked across social media in the days following the decision

That’s right. And how does Amy Klobuchar think that would have played out if she had successfully removed “medical misinformation” from being protected by Section 230? Under such a world, where Facebook would be liable for medical misinformation, the only smart move would be to rapidly try to take down anything medical related entirely, to avoid the risk of liability.

And this would be especially true over a hot topic like abortion.

This is why Senators like Ron Wyden have pointed out that we need Section 230 now more than ever because Republicans are pushing very real bills that would try to try to make social media websites liable for allowing users to post information about abortion. Section 230 preempts such laws. Or, at least it does for now. But if Klobuchar succeeds in removing medical information from Section 230, then… perhaps not.

So, hey, Senator Klobuchar, maybe stop trying to undermine that part if you actually want Facebook and Instagram to help people “share stories about the impact of the decision, let others know how to legally obtain abortion services.”

As people across the country took to the internet to discuss the Dobbs decision, both Facebook and Instagram removed posts about abortion. Reports indicate that multiple posts providing accurate information about how to legally access abortion services were removed, often within minutes after the information was posted. Others reported that posts mentioning abortion were taken down or were tagged with “sensitivity screens” and warnings, including a post promoting an abortion documentary, a posting entitled “Abortion in America How You Can Help,”5 and a post from a healthcare worker describing how people were already being harmed by laws banning abortion. One organization dedicated to informing people in the United States about their abortion rights temporarily had its account suspended. Users reported similar issues last fall when Texas’s law banning abortions after six weeks went into effect.

Last week, Meta spokesperson Andy Stone pointed to Facebook’s policy banning attempts to buy, sell, trade, gift, or request pharmaceuticals on its platform as the reason for the posts being removed. Stone acknowledged, however, that Facebook and Instagram have had problems applying the policy to posts about abortion.

Yeah, because determining what is legal information regarding pharmaceuticals is already hellishly difficult… and if (as Senator Klobuchar wants) it also because legally risky, then Facebook is going to be even more aggressive in trying to take down that information.

So, if this is really as big a concern as Klobuchar makes it out to be she should pull her own medical misinformation bill and admit that it would make the problem worse, not better.

Instead of recognizing that she’s a part of the problem, the letter instead demands all sorts of information about Facebook and Instagram’s content moderation practices and policies. I hope that Meta tells them to pound sand. Those are editorial decisions, and it’s none of Congress’ business. The demands are no different from Senators demanding that a news organization reveal their editorial policies, why they rejected certain articles, or why they lead with a certain story.

Everyone would freak out if Congress demanded such information, as they should here.

I mean, this is, yet again, the flip side of Republicans and their nonsense populist freakouts about “anti-conservative bias.” If Klobuchar and Warren are demanding this kind of information, and get it, then that just opens the door to Senators Ted Cruz and Josh Hawley demanding the exact same info, but not about policies on abortion, but rather whatever new moral panic they have today.

So, Senators stop meddling in the 1st Amendment protected editorial decision making of media organizations and (more importantly) stop trying to pass laws, like the medical misinformation bill, that would effectively serve to silence more of the conversation about abortion that you (correctly) deem so valuable.

Senators Klobuchar And Warren Are Mad That Meta Is Taking Down Abortion Posts; If They Were Serious, They’d Protect Section 230

6 Signs You Should Bring Back Your Old SEO Agency

Deans Only Like Preferential Treatment When It Benefits Their Law School